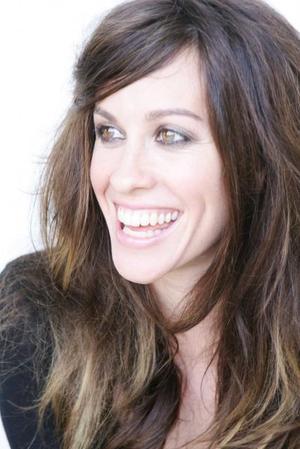 A few weeks ago I got a call from one of my producers Guy Sigsworth saying that he’d nearly finished the project he, and his colleague Andy Page, have been working on for the majority of 2007 - the brand new Alanis Morissette album ‘Flavors of Entanglement’. Guy asked if I would pop over to his studio to have an album playback and share my thoughts. I was really excited, partly because I didn’t really know what to expect.

When ‘Jagged Little Pill’ came out in 1995 I was 14, and it swiftly became one of the most important albums for me alongside Joni Mitchell’s ‘Blue’ and Tori Amos’ ‘Little Earthquakes’. I loved their honesty, their melodies and their strength. Skip forward to Autumn 2006 and I was working with Guy on ‘Winter’s Coming’, the closing song for my debut Temposhark album. Alanis had just approached him to see if he’d be interested in collaborating.

One year on, I arrive at Guy’s studio in West London. He reminds me that by now they’ve produced and co-written well over twenty songs! In this one afternoon I hear 22 songs in total, and as each song went by, it was like falling in love with Alanis all over again.

Four highlights for me were ‘Citizen Of The Planet’ which starts off with intriguing lyrics that twist and turn around a captivating melody before hurtling into one of the best choruses of her career - it’s just MASSIVE and her voice cuts right through you... Another gem called ‘Madness’ is spell binding in its beauty, and actually a really long song at over six minutes if I remember correctly, but unusually it didn’t feel long at all! I could’ve listened to that one over and over again...

‘Straitjacket’ is another powerful track that has stuck in my head, with genius lyrics and great melodic hooks... whilst my favourite of all the songs is called ‘Torch’. It’s just the most touching, almost devastating, dedication to the end of a relationship and the things you miss most about your day-to-day life with a partner.

And it was on hearing ‘Torch’, that I remembered why Alanis is such an important voice. She is so good at channelling her subconscious, those true thoughts most people hide. She can take those deeply private emotions and translate them in a simple, easy-to-relate-to way; putting into words what so many of us feel. This new collection of songs takes you on a serious emotional journey, across many highs and lows, and is possibly her best song writing since ‘Jagged Little Pill’ and 'Supposed Former Infatuation Junkie'. It’s just so easy to connect with – the end of a relationship, the value of childhood friends, complicated family ties and all kinds of emotional ‘entanglements’.

Robert's review of Alanis continues after the jump!

Having heard these new songs, the first thing that struck me was Alanis’ voice. It seriously took my breath away. She sounds invigorated and consistently on top form. The diversity of her voice really comes across in what must be some of her best vocal performances recorded. In some songs it just sounds like she’s flying, the vocals are spot on! And the song writing really delivers – the lyrics are fresh and the melodies take a whole new direction.

As you'd expect from Mr Sigsworth, the production and arrangements are so unique, no-one else could make music sound this beautifully compelling. The wall-of-guitars in one track is like nothng I've ever heard. I bet that someone like Metallica or Marilyn Manson will be calling Guy up next to get that exact sound! There’s an epic quality to many of the tracks, making them perfect for film soundtracks - one even sounded a bit like a James Bond '007' theme tune! Any of the 20+ songs that don't end up on the final album tracklisting must find a good home on soundtracks, they're all worthy of maximum exposure.

‘Flavors of Entanglement’ is without a doubt a career highlight. It was almost like a new discovery for me, or a re-discovery, of a voice that had been such a big influence on the teenage me. In the same way that Madonna’s ‘Ray Of Light’ with William Orbit delivered us a new perspective of Madonna, Guy’s and Alanis’ meeting of minds has produced a fresh, classy, gutsy and uplifting masterpiece that will stand the test of time.

‘Flavors Of Entanglement’ will be released in Spring 2008 on Warner. Alanis Morissette will be performing new songs from the album on her USA live tour from January 25th until March 18th 2008 with Match Box 20, for full dates and ticket info, visit www.alanis.com or her MySpace (which is where the photo for this review came from).

Learn more about the music of Guy Sigsworth at his MySpace or entry at Wikipedia. Have a listen to Guy's previous band project Frou Frou. Plus, read a behind the scenes interview with Guy and Andy about 'Flavors' at Arbiter.co.uk