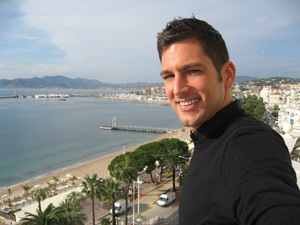 I made it back home this weekend after a hectic trip to Europe last week that was made up of traveling to three different countries in six days. I was also in Cannes, France where I shot that photo of me posted above. That place is totally terrific. I bet it is happening every year during the Cannes Film Festival.

Musically, there wasn't a whole lot of new stuff to report about. Driving in a cab back to the airport in France, I was surprised to hear Daughtry on the radio. The American Idol contestant is going global. It made me wonder about what it is that makes certain pop music resonate around the world. It is fascinating to me that people who live such different lives in such different environments still often listen to the same music. It might be a cliché, but music really does connect people even if they don't understand the lyrics. It is the emotion that matters I think.

Talking about Daughtry, I caught him on the broadcast of the 2007 American Music Awards where he was one of the big winners. It places him in pal position to scoop up a few Grammy Awards as well next year. I liked the show that ranged from Fergie's poor vocals to the solid performances of Maroon 5 and Lenny Krativz, and from the deliciously bizarre duet of Beyonce and Sugarland to a bit of nostalgia with Duran Duran. Alicia Keys was strong too, but I was disappointed she invited homophobic Beenie Man to join her on stage. Boo!

French female rapper Koxie is on the top of the charts in France with "Garcon." Lily Allen meets Peaches or something like that.

I listened to Celine Dion's new album when I was in Las Vegas last week and wrote up a little review for Bravo.

Temposhark will finally be releasing their debut on February 28 in both the U.S. and Europe. It is about damn time!

Japanese J-pop sensation is taking over the Europe with "Japanese Boy." It's trashtastic.

Do you remember Nena?

Listen to some of the best European hit tunes on Dutch radio station Radio 538 here.

U2's Bono talks about unreleased track "Wave Of Sorrow" from the upcoming "The Joshua Tree" re-release.