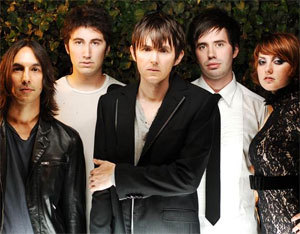 I featured the original version of Mighty Six Ninety's "Mistakes Like These" as a Free Download back in June. It is a synthy pop-rock tune that echoes the sound of bands that inspired the group such as New Order, The Cure and The Smiths. Now, the California five-piece (that was named after a Baja California pop radio station) is ramping up for the big time and has solicited the help of remixers to create new interpretations of the song to get them more attention.

James Iha from the Smashing Pumpkins got his hands on "Mistakes Like These" as well and created a tight, kicking remix of the song that is decent but not as good as the original. The remix will be featured on a Mighty Six Ninety EP that will be available early 2008.

Vocalist and songwriter Rich Michalowski wrote me earlier to explain how the song came about. "I was terribly depressed and wrote half the song on the edge of my bed late one night," Michalowski writes. "It was more about a feeling than the lyrics. Jeremy [guitarist] and I later finished the chorus and pre-chorus together over the phone and during a few studio sessions."