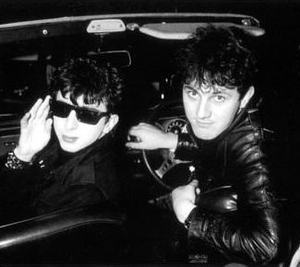 British electro-duo Soft Cell is set to launch a remix compilation album, titled "Heat: The Remixes," on Bizzare/Universal Records on January 28. This double LP includes brand new interpretations of many classic singles by Marc Almond and Dave Ball, plus key album tracks, b-sides and other rarities.

A press release explains that "all the remixes featured on the album have been reworked by genuine fans of the band, resulting in the respectful updating of a seminal electronic era." Remixers featured on the album include Richard X ("Seedy Films"), Paul Dakeyne ("Tainted Love"), The Grid ("Sex Dwarf") and Kinky Roland ("Entertain Me").

An expanded digital edition, featuring additional bonus remixes not on the CD will also be available. A strictly limited edition vinyl issue of key Soft Cell single "Torch" remixed by Manhattan Clique is currently available to purchase at the Planet Clique web site.

Stream some of the mixes from "Heat: The Remixes" on this special Soft Cell Remix MySpace page, including the absolutely amazing Richard X filthy, gorgeous remix of "Seedy Films" and the Fischerspooner-esque electro workout of "Sex Dwarf" by The Grid.

Full track listing after the jump.

More mixes to be added in the weeks to come.