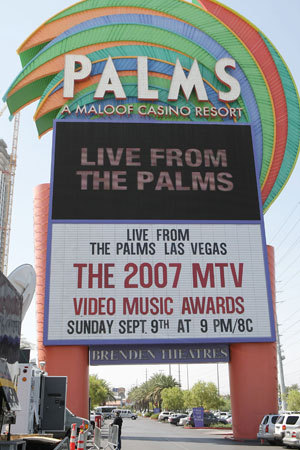 It is that time of the year again!

After attending the MTV Video Music Awards for four years in a row (like here and here when I had a hot date with the Moon Man), I am skipping this year's event due to unforeseen circumstances.

I am sure it will be a jolly good time, and hopefully there will be plenty of unscripted moments that will give us something to blog about on Monday.

The most-hyped event of the show is Britney Spears' "comeback" performance. It would be really clever of her to make of fun of all the bad press she has received over the past months. How hot would it be if she would come out kicking around some strollers on stage, or what if she would take off her wig and show her shorter, new hairdo? This could work for her.

Look out for images of newcomers Team Facelift who will be entering the Red Carpet at the Palms Hotel on a white horse in linguine jockstraps. No joke.

Timbaland will be presenting the show, and Mark Ronson will be the night's musical maestro who will direct the house band. Together with The Dap-Kings (who toured with Amy Winehouse) on horns and Stu Zender on bass, Mark will take to the decks, guitar and keyboard. Along with his own material, the DJ/producer will be creating and performing unique re-interpretations of a number of high profile songs nominated for awards at this year's event.

Foo Fighters have enlisted friends to join them for their performance. System of a Down's Serj Tankian, Mastodon and old friends Josh Homme & Troy Van Leeuwen of Queens of the Stone Age have all signed on to play alongside Foo Fighters.

I'm hoping underdogs Justice will grab the award for Best Video of the Year. Even Kanye might be down with that. "This new Justice video is genius. Maybe 'Stronger' can lose to that, I can respect that," the rapper said.

Prediction for 2008: Chester French will be owning the VMAs.

Curious what's in the VMA gift bag that artists receive backstage? Have a look! (Click image to enlarge.) 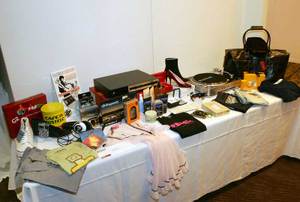