arjanwrites.com: A Few Words About the 2007 MTV Video Music Awards

A Few Words About the 2007 MTV Video Music Awards

Britney Spears and the VMAs make a good team. They're both a total mess.

MTV moved their annual Video Music Awards extravaganza from New York to Las Vegas in an effort to turn around the show's sliding ratings.

But they failed. Miserably.

The entire show was an incoherent mess that demonstrates that this network has lost its relevance and is struggling to keep its core audience captivated.

There were many low and embarrassing moments throughout the show. Most noteably, Britney Spears' comeback disaster. The fallen pop princess looked awfully out of shape and her half-hearted, amateurish performance was poorly prepared and lacked vigor. Clearly, she has forgotten how to lip-synch and execute a simple dance routine.

Note to Britney: Can you at least try to make an effort next time you have a chance to make a comeback?

Throughout the 2,5 hour show, I craved more mainstage performances. All of those hotel room frat party gigs were messy and didn't translate to the small screen. They were also often not shown in their entirety. Rihanna joined Fall Out Boy for a pretty cool and unusual collaboration but their gig was interrupted by a commercial.

A similar thing happened when Adam Levine teamed with Mark Ronson to sing Maroon 5's new single. A quarter into the performance a Sprint promo dropped into the screen. Pretty disappointing for a show that is supposed to celebrate popular music.

Ironic was when Justin Timberlake challenged MTV to "play more videos" and show less reality series in his thank you speech after he received his award for Best Male from the F-listers who appear on The Hills, one of MTV's pseudo reality shows.

Timberlake returned for some accomplished dance routines during the show's finale. He joined Nelly Furtado and Keri Hilson for a Timbaland medley.

The show had two highlights that were worthwhile watching. Chris Brown's popping dance routine was electrifying and truly a career-defining moment for the young and very talented R&B singer.

Alica Keys' stole the show with the performance of her new single "No One" that was solid and on pitch. What a pro she is. 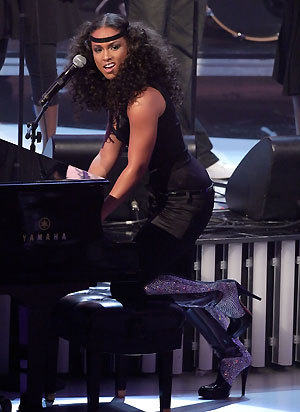