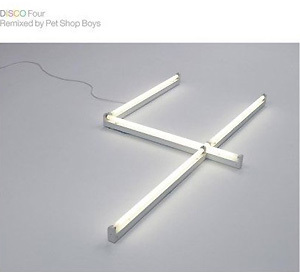 The remix is an accomplished revamp of the original track with its dramatic new strings, vocoder effects and a bouncy techno pulse. The added male choir is reminiscent of "Go West" and boosts the grandeur of the song.

"Disco 4" collects together Pet Shop Boys' extended dance mixes of The Killers, Madonna, Yoko Ono, Rammstein, Atomizer and David Bowie, as well as their Perfect Immaculate Mix of "Integral" and their maxi-mix of the single 'I’m With Stupid'.

Neil and Chris put their new "Integral" remix together last month, and explain on their web site that they named it after the spoken line in the song, "Sterile, immaculate, rational, perfect."

The Pet Shop Boys web site streams a slightly different version of the song in its Products section categorized under Exclusive Tracks.  The mix posted on VeryPSB.com appears a recording of the remix during a live performance (or at least include audience sounds at certain moments).

I must say that I prefer the "live" version. The cheering of the audience adds to the energy and build up of the production. Head over to VeryPSB.com to hear it. Highly recommended. (Click here to pre-order "Disco 4" at Amazon UK. The disc will be out in Europe on October 8.)