arjanwrites.com: Listen to Nightmare of You "I Don't Want To Dance Anymore"

Listen to Nightmare of You "I Don't Want To Dance Anymore" 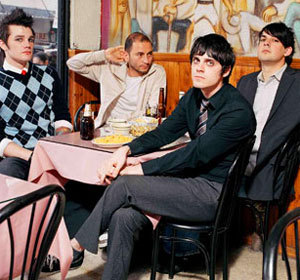 I was immediately enamored by the music from Nightmare of You when I first heard their self-titled debut in 2005. The album was filled with synthy little gems and heartfelt songwriting that invoked memories of The Killers and most notably The Smiths and Morrissey.

Nightmare of You bring more of that indie goodness on their new  EP, titled "Bang," that is available on iTunes and SmartPunk.

The group released their debut record on their own Bevonshire label and licensed the music to Warner Brothers' East West Recordings for distribution in the United States. But earlier this year, Nightmare of You announced on their MySpace page that they had split with East West Recordings. "As of today, April 17, 2007, Nightmare Of You and our respective Bevonshire Label have left our old home at East West and are free to explore the best options for the future of the band. Our forthcoming album will NOT be affiliated with Sire Records nor will it suffer from the poor distribution our debut endured."

Lead track taken from their independently-released "Bang" is "I Don't Want To Dance Anymore." It is an energetic slice of dancey indie pop with melodic guitar riffs, Brandon Reilly's distinct vocals and his witty, self-deprecating lyrics.

Get "I Don't Wanna Dance Anymore" as a guilt-free MP3 download on AOL.