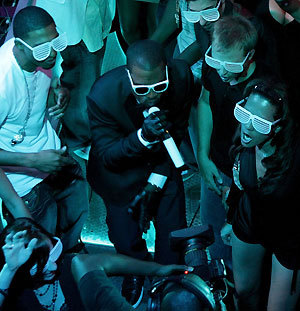 "I wasn't mad that I just didn't win any awards," West told New York City's Z100 last night. "For me, [MTV] made it seem like performing on the main stage was a bad thing, and the suites were just so great. It was my dream when I made 'Stronger' to open up the VMAs with a real power performance."

He goes on to say that he really got upset at the end of the telecast when he saw that Justin Timberlake and Timbaland both had a suite performance and a mainstage show.

West also argues that MTV "exploited" and "antagonized" him in the hopes of creating a TV moment. And there's more. According to West, MTV knew very well that Britney Spears wasn't ready for the big time, but put her on anyway.

West said late Sunday evening he will never do anything for MTV again. So far, he is keeping up with his vow. He canceled his appearance on TRL today to talk about the release of his new album.

But who needs TRL when you can rant and rave? You can get a lot more publicity that way. And it's working. Did I mention his new album is out in stores today?