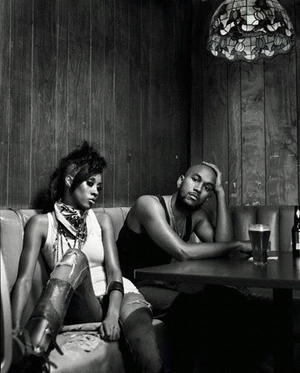 It seems that the same people perform and win awards everywhere over and over again - Justin, Fergie, Beyonce, Kanye, Rihanna, Shakira and the list goes on. Wasn't this year's stale VMAs a near carbon copy of last year's event? What pop needs right now is some new stars. Artists that can re-energize the pop scene with tunes that are not freakishly different, but offer a new perspective on what we already know.

I tipped J*Davey earlier as one of the most noteable, emerging new acts for 2008. The duo of singer Jack Davey and soundboard wiz and Prince scholar Brook D'Leau fuse together an invigorating mix of what they like to describe as "genre X," a blend of electronica, rock, hip hop, jazz, pop and disco.

Los Angeles-based Jack and Brook met in high school through a mutual friend and they quickly discovered they had similar taste in music. Jack is mostly influenced by classic jazz and late '70s fusion, while Brook has an interest in sounds from the '80s like Prince, Talking Heads and the Police.

I saw the group perform in the Viper Room in Hollywood, and it was clear that charismatic frontwoman Jack Davey has the stuff stars are made from.

The group was signed to the rock division of Warner earlier this year, which will help them not to be molded into another hip hop-oriented clone. J*Davey is currently working on their debut that is scheduled to be in stores in 2008

The group put out a mixtape of some of their demos compiled by DJ Lindsey to start a grassroots buzz for the band. You can download it here. Listen to "Mr. Mister," a track that is included on the free mixtape. It is obviously still a demo that needs some work, but the groove is sexy, sleek and has a hooky rock and roll swagger to it. Very promising.