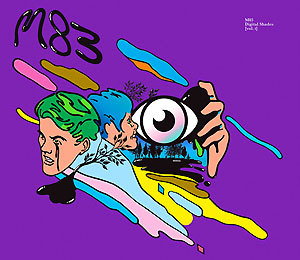 The record was originally recorded in 2006 and features the warm, delicate and rich sonic soundscapes that mark M83's sound. It is a lot different than the fierce French electro from artists such as Daft Punk, Alan Braxe and Justice, but it will likely appeal to their fans for its mind-altering and electronic qualities.

Recorded primarily at his home studio with the assistance of Antoine Gaillet, Gonzalez was able to work "without pressure," working on the record at his own time and pace. Inspired by Eno and Krautrock in its many forms, M83 focused heavily on subtleties and atmospherics during the writing process.

Gonzalez is currently in the studio working on a his next artist album, which is being recorded with Ken Thomas (Sigur Ros, Sugar Cubes, Cocteau Twins, Suede) and Ewan Pearson (Tracey Thorn, The Rapture, Ladytron).

Check out a guilt-free MP3 download of his track "Sister (Part II)" that is taken from "Digital Shades Vol. 1." It is a beautiful, moody production that will let you dream away across the clouds. A great way to start out your work week. (Track posted with permission from Mute.)