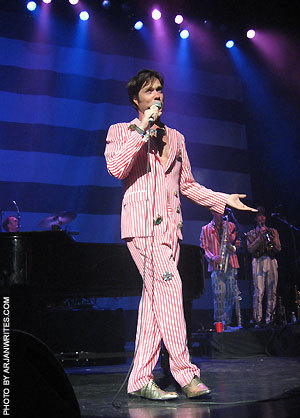 Rufus Wainwright had two reasons to celebrate on Monday.

Not only was he performing his biggest show in Atlanta to date, it was also the day Karl Rove retired from the White House and the singer gladly dedicated the show to him.

Wainwright kicked his Atlanta gig off in style, looking circus chic in a red and white striped suit, belting out "Release The Stars," the title track from his latest album. For his next song, he turned it down a few notches and sat behind the piano to play a glowing rendition of "Going On A Town," followed by "Sancoussi" on guitar.

He then went on to greet the crowd and to talk about the meaning of the giant black & white American flag that formed the backdrop for the show. He explained that the black & white stripes symbolized everything bad in America, while the glittering stars represented everything that's great about it.

Leave it up to Wainwright to inject some subtle activism into his performance.

A mix of old and new songs followed, including the Brandon Flowers-inspired "Tulsa," "The Art Teacher," "Tiergarten" and "Between My Legs." He noted during the show that his grand mother was raised in Tifton, GA but he added, "I have no idea where that is." 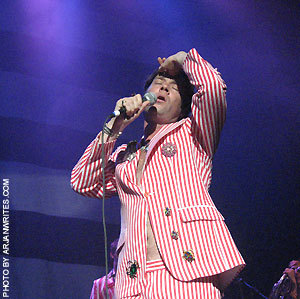 The singer announced a brief break ("I'm gonna shoot up heroin or something. No, no. I'm just kidding") and he returned 20 minutes later dressed in authentic German lederhosen to continue his set with more new songs. In fact, Wainwright ended up playing his entire new album. How uncommon is it these days for artists to play their entire album plus more? It was truly a treat.

True to form, he played two Judy Garland songs, "If Love Were All" and "Foggy Day." He noted how gay it was to sing Garland in lederhosen. The singer had trouble with "Nobody's Off The Hook" that he introduced as "difficult to play." He slipped up during the song and started over with an apology, but the spontaneity of it all only added to the intimacy of the show.

Wainwright returned for a lengthy encore dressed in a white bath robe, playing "I Don't Know What It Is," "Pretty Things" and an absolutely riveting version of "Hallelujah" that featured his sister Lucy on guest vocals. Truly one of the highlights of the night that sent chills down my spine.

Completely unexpected, Wainwright moved to the front of the stage, put on jewelry and high heels, and painted on some bright red lipstick. He then took off the bathrobe and appeared as a cabaret diva to perform another Garland classic, "Get Happy." A truly amazing, fun and energetic dance performance with his entire seven-piece band wearing black tie.

He finished the show with an acoustic version of "Gay Messiah" that concluded more than two hours of pure Wainwright entertainment.

(Click here for more photos of the Wainwright's show.)