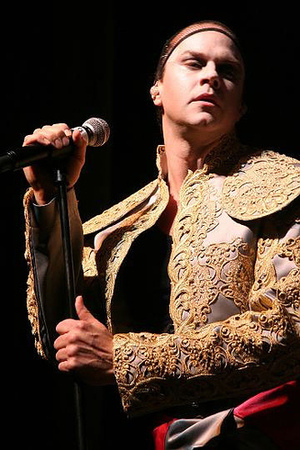 Casey Spooner was videotaped by a reporter from NME about new Fischerspooner music and is giving away some clues about what's to come.

After the duo of Casey Spooner and Warren Fischer split from Capitol Records, Fischerspooner have been recording new music as an independent band since January.

After the "synthetic" sound of their debut and the Linda Perry-produced, acoustic sound of "Odessey," Spooner reveals that their third record does not sound like either two, but more "poppy." This new album is produced by Jeff Salzman who worked on The Killers' first record.

Mmm. That is making me very curious. One of their publicity peeps tells me that the record is currently being mixed in Los Angeles and close to being finalized. The sooner the better as far as I'm concerned. Ever since I heard "Emerge" I have been a Fischerspooner fan. "Odyssey" was so underrated and deserved way more attention. If you have a moment, check out tracks like "Happy," "Cloud" and the sublime "A Kick In The Teeth."

On a related note, Casey writes on his MySpace blog that he recently went to see Justin Timberlake in concert and admits that it "sucked" but that he "loved" the sound of 10,000 screaming girls.