Listen to Private "My Secret Lover" 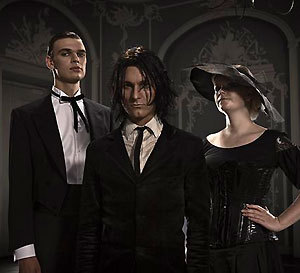 After I posted my Junior Senior interview yesterday, Thomas Troelsen from Copenhagen emailed me about his new pop band Private. Thomas is a singer and producer who previously was the lead vocalist in the popular Danish group Superheroes.

After releasing three albums and touring around the world (and have people like Beck as one of your fans), Superheroes disbanded late 2006. Thomas and two other band members have reunited to continue to make music together as Private.

Head over to Private's MySpace to stream their poptastic "My Secret Lover." A totally fun and fresh '80s throwback tune with Thomas' distinct vocals that are somewhat reminiscent of Jermaine Stewart. The trio is signed to Universal Music and we will surely hear much more from them soon. Pop lovers, please do yourself a favour and go have a listen. ("My Secret Lover" will be available on iTunes Denmark today. It will be released in the U.S. in 2008.)

Listen to "My Secret Lover" by Private:

(Or listen to it on their MySpace page.)