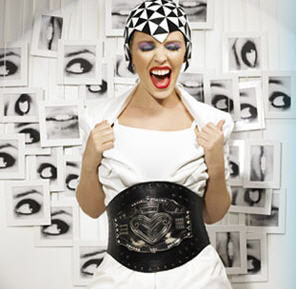 I love a nice surprise.

A ZIP package landed in my email box last night simply titled "Kylie X." It contained seven high quality and complete tracks, titled "Lose Control," "Stars," "When The Cats Away," "Sensitized," "In My Arms," "Fall For You" and "Excuse My French."

These are obviously brand-new Kylie Minogue tracks that are most likely taken from her upcoming new album "Kylie X" that is supposed to come out later this year. (I am not a 100% sure about the tracks' authenticity, but it is definitely Kylie and it is definitely new music.)

My label contacts are mum about what exactly is going on, but the rumor is that Kylie's peeps are deliberately and selectively leaking the record to create early buzz for the album. Clever. It is obviously an effective marketing technique that is no longer exclusive to the "tiny courageous" who are trying  to kickstart momentum for their new music (such as blog fave Robyn who shot to number one with the support of internet leaks.)

I can tell you that this unofficial "Kylie X" is sounding quite good. It is the same cheeky disco pop that is so typically Kylie with a few very unexpected twist and turns. Missing from this "Kylie X" sampler are "White Diamonds" and her duet with Just Jack, titled "I Talk Too Much," which will appear on the U.S. release of Jack's "Overtones."

"Fall For You"
A futuristic dance stomper with a totally hot, high-energy chorus and a swirling synth riff. It has a similar energy as "Come Into My World" but with a higher bpm.

"Excuse My French"
A sexy and sleek electro-pop tune that reminds me of Kylie"s "Fever" phase.

"In My Arms"
The most unusual of the bunch, and I wouldn't be surprised if this is in fact the much-anticipated Calvin Harris production. It is best described as a very fresh, mid-tempo alternative dance tune that starts out as an indie rock track with live guitar and drums before it kicks into a dirty synth arrangement with a really tight groove and '80s type sound effects. This track is very, very good.

"Stars"
Kylie does her best pop-rock. Yeah, ladies and gentlemen. There is an electric guitar throughout the track that is emphasized during the emotive, near-epic chorus of the song.

"Lose Control"
This sounds very experimental. Minogue definitely ventures left-field here with a song full of special vocal effects, tweaked synths and bursting basslines. Still very stylish though. It is very restrained production-wise, not over the top in terms of sound and balance. This could very well be the Groove Armada-produced track. It's remarkable.

"Sensitized"
Another very hot and sexy track that includes a sample of somebody yelling "whoa!" in a high-pitched voice. A little odd, but cool.

"When The Cats Away"
This track sounds a bit generic to me. Not really that special. Would probably make a good b-side. The song has a very prominent, bouncing bassline that might make it a good track to remix with.