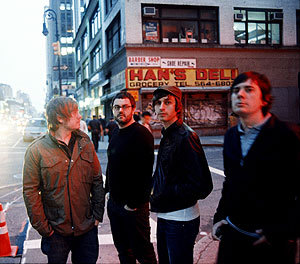 It's all doom and gloom on this brand-new Athlete track, "Airport Disco." This epic tune is taken from the group's self-produced new album "Beyond The Neighborhood" that will be out in the U.K. on September 3. The new album follows the release of their much-anticipated new single "Hurricane" that you can watch here.

A press release describes Athlete's new album as, "Louder, stronger, bigger and altogether more powerful than anything they’ve done before, it sounds like a band who have settled into what they really enjoy doing."

I'm really intrigued why they titled this particular song "Airport Disco." Not sure if I'd like to have a lay-over at this airport. The song's lyrics are rather bland and the song mostly relies on its grand sonic landscape. There's no glitter at this disco. Download a totally guilt-free MP3 of this new song. (Click here to pre-order Athlete's new album at HMV.)