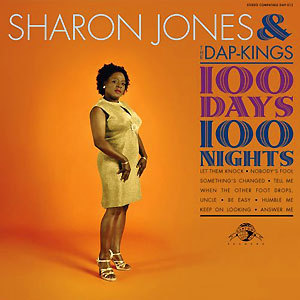 Now that Amy Winehouse is standing on the sideline to get her act together, fans of the bee-hived chanteuse must check out Sharon Jones & The Dap-Kings.

After releasing two albums of their own, the band performed as the backing band on Winehouse's "Back to Black" album and tour. So don't be surprised if it sounds a bit familiar.

Sharon Jones and the Dap-Kings will release their latest full length, "100 Days, 100 Nights," on October 2 on Daptone Records. It is the group's third full-length since their their 2002 debut, "Dap Dippin'" and 2005's "Naturally."

"100 Days, 100 Nights" was recorded in the same Bushwick, Brooklyn Daptone studio as its predecessors, using all analog equipment to achieve the signature "hard-hitting funk and soul sound." To celebrate the release of "100 Days, 100 Nights," Sharon Jones and the Dap-Kings will headline the world famous Apollo Theatre in Harlem, New York City on Saturday, October 6, before kicking off a nationwide USA tour that will run through the months of November and December.