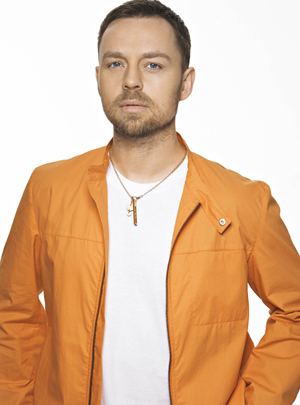 (Below I published the entire article I wrote for Next Magazine after my very personal and candid interview with Darren Hayes in June. Many thanks to Darren for making so much time to meet with me. Enjoy!)

Darren Hayes seemed to have it all. As a global pop star, he'd sold millions of records with the now-defunct Savage Garden, scoring number one hits with songs like "Truly, Madly, Deeply" and "To the Moon and Back." However, nobody knew that Hayes' reality was a lot bleaker. While celebrating the massive success of Savage Garden, Hayes was going through his own personal journey to hell and back, struggling to come to grips with his closeted homosexuality and his troubled childhood affected by domestic violence.

I first met Hayes in the winter of 2006 when we talked about the release of a Savage Garden greatest hits album. Our chat was fun, but turned more serious when I respectfully confronted the singer with the ongoing speculation about his sexuality. Hayes opted to keep his personal life private at that time.

Now, having been through the fire, when we meet again to talk about the release of his upcoming album, "This Delicate Thing We've Made," Hayes is more than willing to discuss his sexuality and the rocky road to self-redemption known as coming out. "It was all a bit awkward. I had never denied being gay, ever," he confides. "I just never spoke about it. In retrospect, one of the reasons I never said, 'Yes, I'm gay' was because I was really miserable. I suffered from depression and I was suicidal. I had years of therapy, because I didn't want to be gay.... If I had been forced to come out, I would have been in Promises rehab. Something horrible would have happened to me."

The tide turned for the 35-year-old Australian singer when he met his partner, Richard Cullen. The two married in a Civil Partnership ceremony in London in 2006. Around the same time, Sony Music and Hayes parted ways and the singer decided to start releasing his music independently.

In personal terms, marrying his lover and making music free of corporate strings meant the end of a difficult road for Hayes and the beginning of a new future, but he still had demons to deal with in coming out publicly. The more he refused to talk about his sexuality, the more persistent the questions became. "Every time I did an interview it was getting worse and worse and worse," he recalls. "Actually, I remember the interview with you and saying to Richard, 'This is ridiculous. I'm spending more time in an interview talking about why I'm not coming out than coming out.' It was just such a waste of energy."

So with a simple post on his MySpace page the singer put an end to all the rumors. "I put up a blog and said, 'Guess what, I married my boyfriend.' I didn't have anything to promote, there was no gain, nothing to sell; I didn't have a DVD out or an exercise video or whatever. I just wanted to let the world know that I wasn't afraid of it...When I let it go, it was just completely liberating."

Today, this fearless Darren Hayes shines on his new double-disc album recorded over a period of three years with talented newcomer Justin Shave and old pal Robert Conley, whom he worked with on his previous solo album The Tension & The Spark. This 25-song, high-velocity record hails Hayes as the undisputed maestro of electro pop, with songs that feature hook-laden synth melodies, kicky dance-floor grooves and gut-wrenching ballads.

The concept of the album is centered on the idea of time travel and his dream to step back in time and mend the past. "It's about me going back to the '80s. Going back to my childhood," Hayes explains. "Facing myself, my young self. Facing my father and retracing all my steps from happiness to misery and trying to drag some joy back."

Together with Justin Shave, who Hayes half-jokingly referred to as "the professor," he developed a powerful singer-producer bond much like that between Madonna and Stuart Price. "I'm a bit of control freak, but the minute I meet somebody [whom] I respect and [who's] as in control of what they do as I [am], then I can let go. Justin turned out to be the first producer that I worked with since Savage Garden."

Hayes experimented with all kinds of new sounds to compliment his signature pop sonics, including a vintage Fairlight synthesizer he bought on eBay to mimic the sound of Kate Bush's "Hounds Of Love," one of the musical inspirations for This Delicate Thing We've Made.

Pivotal tracks on the album include "How to Build a Time Machine," "Who Would Have Thought" and the sublime "A Conversation with God," about his thoughts of suicide. "It's a song about me driving across the Golden Gate Bridge, and saying to god in a moment of madness, 'I don't wanna live anymore. Take the wheel, let me drive off the bridge because I don't care.'"

Now that he's formally and openly a queer artist, Hayes believes he represents a "very normal cross section" of what gay people look like. "I came up in a time when people that were absolutely flamboyant and super camp were famous gay people. I'm not really super camp. I'm not Elton John."

"What's interesting to me is that the sexual attraction between me and my audience has remained," he says. "I don't feel disingenuous. I still love the flirtation with women and they know I'm married to a man and they still flirt with me. That's the highest form of compliment. Each of those women who have stood by me I fucking adore because they're into me for me.