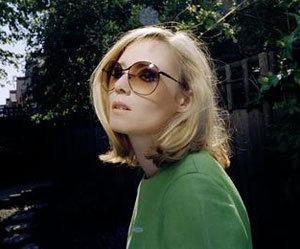 A big thanks to Brent and SoundByte who both suggested to check out new music from Róisín Murphy on my new mini forum in the right-hand column of this blog. (Feel free to share your tips and suggestions as well. I'd love to hear what you're listening to.)

Róisín Murphy is mostly known as the female half of dance-pop duo Moloko who had a massive hit in the late nineties with "Sing It Back." A source close to the singer told me that Murphy just finished mastering her new solo album this week. If the first single and title track, titled "Overpowered," is any indication, we are in for a treat.

This record is Murphy's second solo album that follows "Ruby Blue," her 2005 debut. The disc's title track was featured on the first Grey Anatomy's soundtrack compilation, and the show's musical supervisor Alex Patsavis selected it multiple times to appear on the ABC hit series in its first season.

A press release predicts that "Overpowered" will be "a heady mix of electronic dance anthems, soul-stirring pop songs, deep, dark funk and quirky lyrical genius." The album is co-written and produced by Murphy to perfectly bring her own vision and focus to the record.

Released in the U.K. last week, "Overpowered" is a classy pop-dance tune with an intoxicating, alluring feel performed by the very cool Murphy. The song was written by Róisín and Seiji of Bugz In The Attic and mixed by Tom Elmhirst (Amy Winehouse, Røyksöpp, Grace Jones). The single is accompanied by a series of remixes from the likes of Seamus Haji, Kris Menace, Hervé and Loose Cannons.  Expect the new single "Let Me Know" (a collaboration with Groove Armada) and album to be released in October. (Click HERE to purchase "Overpowered" plus exclusive b-sides in DRM-free MP3 format at 7Digital.com)