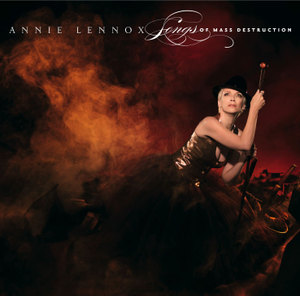 The amazing Annie Lennox is back! Her PR machine clicked into high gear today and it was formally announced that the singer's new album is titled "Song Of Mass Destruction" and will be out in stores on October 2.

Click on the image above to get a better view of the very theatrical and slightly eerie cover art for the new album.

The song was inspired by Annie's involvement with Nelson Mandela's 46664 and Treatment Action Campaign (TAC) organizations fighting for human rights, education and health care for those affected by the HIV AIDS virus. (Kudos to Matt for having the scoop a few weeks ago and giving me heads up.)

Read the entire press annoucement about "Songs Of Mass Destruction" after the jump.

NEW ALBUM “SONGS OF MASS DESTUCTION” TO BE

In a career that has spanned over 25 years, including the 15 years since Annie released her first solo album, Diva, no other British female artist has achieved so much recognition. Over 78 million in global sales, and 33 hit singles compliment the 4 Grammies, 11 BRITS, 5 Ivor Novellos, the Oscar, and the 2 Golden Globes amongst other accolades.

“Songs Of Mass Destruction” showcases an artist who is unafraid of pushing boundaries and challenging herself. Annie delivers thought provoking and intelligent lyrics matched with her distinctive pop sound. She says that this album is the closest she’s been so far to that authentically raw and emotional place, infused with the contrasts of beauty, yearning and sadness. The result, from the haunting introductory song, 'Dark Road' to the closing epic, 'Fingernail Moon', is a sumptuous musical soundscape within which Annie's soulful voice shines and soars.

In addition to being an incredibly successful artist, Annie is a celebrated activist and humanitarian. The new album features the soaring and powerful feminist anthem 'Sing', born out of Annie's involvement with Nelson Mandela's 46664 and Treatment Action Campaign (TAC) - organizations fighting for human rights, education and health care for those affected by the HIV AIDS virus. The track 'Sing' features 23 of the most recognized and successful female solo artists in the world, invited by Annie, to raise awareness and finances for TAC initiatives. Included among the group are superstars such as Madonna, Sarah McLachlan, Celine Dion, Fergie, Faith Hill, Pink, Dido, Gladys Knight, kd Lang, Angelique Kidjo, Bonnie Raitt, Shakira, Melissa Etheridge, Anastasia, Joss Stone, KT Tunstall and many others, as well as TAC activist members own vocal group known as 'The Genetics', whose CD of music inspired Annie to make 'Sing' a reality.