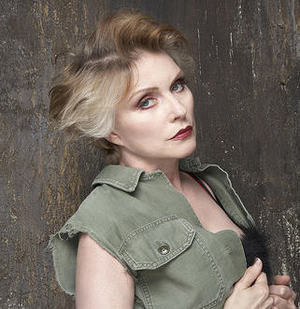 Legendary singer and music icon Debbie Harry returns with a brand-new album early 2008. This marks the singer's first full-length effort with fresh material in 14 years. The disc, titled "Necessary Evil," was initially scheduled to be out in stores in September but its release has been pushed out a few months to January 2008 according to my sources.

Harry showcased her new work at the recent True Colors concert series that traveled around the country to raise awareness about issues facing the GLBT community.  Some fans were disappointed that the singer did not perform any of her Blondie classics. In fact, a New York Times reviewer wrote that it was "a kind of cruelty" that she ignored her biggest hits.

But Harry's new single "Two Times Blue" totally makes up for it. It is a satisfying, new wave-ish pop-rock tune that is the lead track from her new album. An MP3 of the song has been floating around the internet, but download it now totally guilt-free. Get it while it's hot.