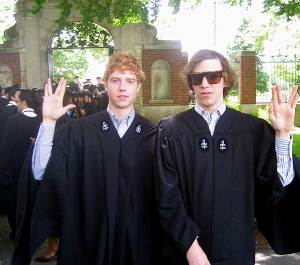 Life will never be the same for D.A. Wallach and Maxwell Drummey.

Not only did the Chester French duo recently graduate from Harvard University, they also finally signed to Star Track/Interscope Records to record their music. Star Trak is the label founded by The Neptunes' Pharell Williams and Chad Hugo that originally specialized in hip hop music, but with the signing of Chester French appears to bring some variety to their artist roster.

I've been championing Chester French for a while and I'm very excited for D.A. and Maxwell with this major deal. Look out for their debut "Love The Future" in the spring of 2008.