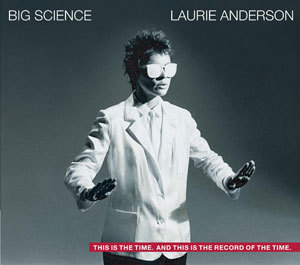 Frequently, I write about artists that are influenced by the sounds of the '80s. Laurie Anderson's 1982 album "Big Science" is considered by many one of the albums that lead the way for the synth-oriented sounds of that era. Interestingly, if you listen to Anderson's music it is hard to put a timestamp on it. It could be 2 weeks old, 10 years old or 3 years early. Her work is truly timeless.

Nonesuch Records will be re-releasing Anderson's "Big Sciene" in July to celebrate the 25th anniversary of this ground-breaking record.

Laurie Anderson is regarded as an avant-garde performance artist who is mostly known for her multimedia presentations that enable her to express herself as a visual artist, poet, composer, photographer and instrumentalist at the same time.

In the early '80s, she became a familiar figure at Lower Manhattan's hip and happening visual arts scene that also included people like David Byrne and Philip Glass. "Big Sciene" is generally considered her debut album. It appeared in 1982 and is a selection of tracks from her "United States Live" project, a legendary seven hour performance piece that includes her commentary on the social and political anxiety she perceived in the United States at the time. "Big Science" includes the 8-minute epic "O Superman," which became a top ten hit in the UK, and "Let X=X," a poetic, synth masterpiece.

The re-mastered version of "Big Science" includes the classic video for "O Superman" and the original B-side track "Walk The Dog." This is some pretty amazing stuff.