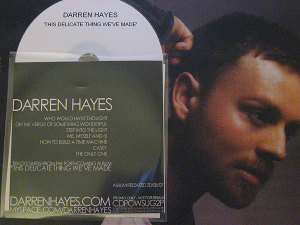 In preparation of my intervew with Darren Hayes in New York later this week, I have been listening to a 7-song sampler of the singer's upcoming album "This Delicate Thing We've Made." A few weeks ago listeners were already introduced to two new songs on Hayes' MySpace page, including "Step Into The Light" that is currently impacting dancefloors with its excellent remixes.

I have been looking forward to hearing new music from Darren. I was impressed by his candor and take on making music when I first met him in March 2006. It is the combination of hooky pop tunes, his yearning tenor vocals and accessible lyrics that make him the star he is. I also admire his drive to push his artistic boundaries by going into "left-field" directions as demonstrated by the experimentation on his previous album "The Tension & The Spark."

The 7 songs on this advance disc show that Hayes is at the top his game. The narratives are complex and the confessions are personal, but he packages it in such a way that it is still pop and never tedious or long-winded. Each of these 7 tracks is a gorgeous electro-pop production that is totally contemporary but has a lot of cool '80s ingredients. This stuff is top-notch, and yes, he might even break into the U.S. pop scene with this album. These songs are that impressive. A run-down of the tracks:

"Who Would Have Thought"
Darren posted this track on his MySpace page back in April. It is a moody electro-pop song that I interpret as a reflection of Hayes' intense personal journey of the last three years. "Who would have thought the tiny courageous? Who would have thought that love so belated could save me?," he sings. The tide has finally turned for Hayes who started his own Powdered Sugar record label, came out as a gay man and married his boyfriend Richard Cullen in 2006. His vocals soar, and he even added wedding bells towards the end of the track.

"Casey"
Amazing. This track (that runs almost 7 minutes) is hands down my favorite. It kicks off with Darren and heavy keyboard strings. Around the 3 minute mark it progresses into a pop-dance track that eventually crescendos into an anthemic Balearic-style trance-dance tune that gives me goose bumps. Darren talks about the year 1989. I wonder if this song refers to a first love with lyrics like "So tired of being underrated, don't take me home. I feel life when you come and save me. I was a mixed up kid and you were my sanity." Tiesto or Armin van Buuren will have a field-day remixing this track. (Update:  Lou writes Casey is Darren's sister.)

"On The Verge Of Something Wonderful"
This track follows the theme of "Who Would Have Thought" with Hayes' proclaiming his independence and freedom. His falsetto is layered over a simple melody that is guided by hard-hitting drums.

"Step Into The Light"
A haunting electronic piano introduces the song, setting the tone for what's to come. The song turns into a disco stomper with a Donna Summer "I Feel Love" type bass drone, which creates plenty of dancefloor drama. "Step in to the light. This stuff doesn't bite you. Just wanna be your friend," he sings.

"Me, Myself and (i)"
The disco bounce continues on this track. Hayes' sped up vocals are soulful, flirty and fun. Yeah, folks. Meet Diva Hayes. The disco ball spins the night away on this one. Hayes does something robotic that could pass for a rap. Hayes lets the good times roll, "I don't know what the future will bring, but I'm willing to sing until I drop."

"How To Build A Time Machine"
Hayes' was fascinated by the idea of time travel while making this record. It could be a "storytelling device to address regret and possibility for change. I kept obsessing over the notion that if I could travel back in time to the source of my sadness as a child, I would not choose to bring back the violence or tears. Instead I'd drag joy back," he says in his bio. That idea clearly inspired this song. It is a nearly acoustic production with vocals, guitar and a simple drum machine. Only the chorus includes some synth frills and the conclusion of the track features a wild orchestral, string section. Especially touching is that Darren appears to forgive his dad for the pain he caused him during his childhood, "I call my dad and I tell him I miss him." Intense.

"The Only One"
Listening to this song, you can't stop thinking that Darren wrote this for his husband Richard. It has a simple production with a basic layering that is reminiscent of Art of Noise's "Moments In Love." Hayes appears to be glued to the mic with his vocals sounding deformed to create emphasis I assume. He tells Richard some of the sweetest things, such as "No one can keep me from the danger that is myself [but you]."