arjanwrites.com: Free Download: Hello Stranger "Take It To The Maxx"

Free Download: Hello Stranger "Take It To The Maxx" 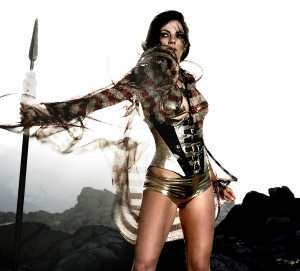 Los Angeles based outfit Hello Stranger is ready to to conquer the world one new fan at the time. The pop-rockers recently teamed with hip hop producer Mike Elizondo to lay down some tracks for their new album that is scheduled for release later this year. Elizondo knows how to turn obscure talents into stars. He worked with Eminem, Pink, 50 Cent, Fiona Apple, Alanis Morrissete and Nelly Furtado, and more recently he produced songs on Maroon 5's new CD and Natasha Beddingfield's forthcoming new disc.

Hello Stranger is fronted by the ultra-glam, sexy and hyper-charismatic Juliette Commagere. Together with Jared Smith, Joachim Cooder and her brother Robert, the foursome has been generating a strong buzz in the L.A. music scene as one of Silverlake's most popular indie music acts.

Julliette has always been a darling of a big shot label executives. She was even offered a lucrative recording contract with the opportunity to record the track "Screwed" as a single. She declined. The song was later used for Paris Hilton's debut album.

Instead, Julliette continued to work with Hello Stranger on the group's self-titled debut album. The record was produced by Joachim's father, the legendary Ry Cooder. It has something for pop-rock lovers of every kind. It features '80s influences from bands like Blondie and The Cars to more contemporary inspirations such as The Killers and The Faint. "Take It To The Maxx" is the lead single from the album that has a fresh, hooky chorus that balances perfectly between pop and rock. Also, check out the video here that is like a modern interpretation of cult films like Xanadu and Barabarella. And it shows Juliette dancing around with a synth guitar. Hot! (Click here to purchase "Hello Stranger" on iTunes.)

Download "Take It To The Maxx" by Hello Stranger [MP3]