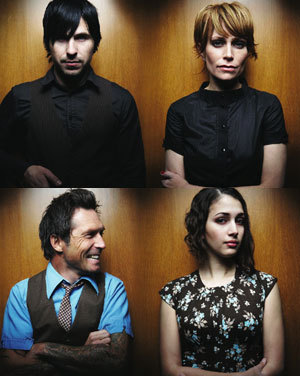 Great Northern serves up pop-rock tunes that are skillfully prepared according to the classic recipe. Take for example their new single, titled "Home." It is one of those memorable adult-contemporary pop songs with its emotive melody, polished his & her vocals and a slow-churning, multi-layered instrumentation that makes it suitable for repeated play.

Great Northern is the brainchild of longtime friends Solon Bixler and Rachel Stolte. They later added drummer Davey Latter and bassist Ashley Dzerigian to the final group lineup. The band tuned their musical style by performing in clubs around Los Angeles and working with engineer/producer Mathias Schneeberger who "wants to make music beautiful, make it important and stand out," says Bixler.

The result of their collaboration is Great Northern's debut album "Trading Twilight For Daylight" that brings more of the densely layered melodies, velvety chimes and keyboard strings that you can also hear on "Home." I wouldn't be surprised if this track would end up on the next Grey's Anatomy soundtrack.