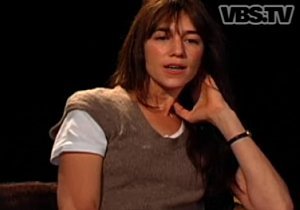 Famed music video director Michel Gondry chats with singer Charlotte Gainsbourg in a special series for VSB.tv. The two previously worked together on the movie "The Science Of Sleep" that features Gainsbourg and Gael Garcia Bernal. It is a casual and candid chat in which Charlotte talks about her famous parents, her special relationship with the guys from AIR and why she is so camera shy.

Gainsbourg explains in her near-perfect British accent that she specifically chose to record her album "5:55" in English to avoid comparisons to her parents. Humble and soft-spoken, she also talks about her insecurity as a performer, which is the reason why is not touring to promote the album.

And if you missed the guilt-free MP3 of her song "The Songs That We Sing," go HERE to download it.

(Thanks to Jon for the clarification.)