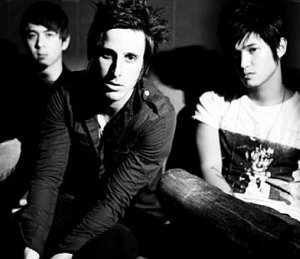 What happens when you mix up the grand melodic rock of Coldplay with the bass-driven sound of The Killers and the '80s pop sensibilities of Duran Duran? The result is something that sounds like the music of Test Your Reflex, a new pop quintet from Thousand Oaks, California.

Test Your Reflex was born when lead singer Ryan Levine (not related to Maroon 5's Adam Levine) spent a year in his garage tinkering with melodies and song productions. He was inspired by the sonics of classics like U2's "The Joshua Tree," Peter Gabriel's "So" and Joni Mitchell's "Blue" as well as all things Bowie and Eno. "Levine quietly honed his love of song and melody while most of his peers reveled in the sounds of local acts like Linkin Park and Incubus," a press release states.

Levine hooked up with drummer Sal Corez and RC (guitars), Andrew (keys) and Agustin (bass) quickly joined them thereafter. Together they started to record their debut album "The Burning Hour" that caught the interest of RCA/SonyBMG. The big and mighty label signed the band and prepped them for the big time. First single from the group is "Pieces Of The Sun" that is currently a breaker tune on AOL Music.

When I listen to Test Your Reflex, I can't help but notice that the group is trying really hard to sound like their idols. As a result, their music sounds somewhat bland and lacks originality. However, '80s lovers among us will be in for a treat. Take for example the song "Black Hearts" that is Duran Duran all over again.

Stream Test Your Reflex "Pieces Of The Sun" [real]