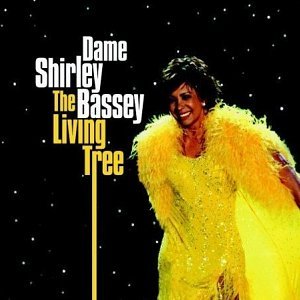 Dame Shirley Bassey, the world's undisputed glamour queen, is back with a brand-new single to celebrate her 70th birthday this year. She might be old, but she has not lost of any of that spark that has kept her career steaming ahead for more than fifty year. Mostly known for singing the legendary James Bond themes "Goldfinger" and "Diamonds Are Forever," Bassey has the voice and stamina that will make much younger artists pale in comparison.

Her new single was composed by London female rock duo Never The Bride. The story goes that they wrote the song and thought it was perfect for Bassey. They left the tape at the concierge desk at a posh Monte Carlo hotel where the dame was staying with a note that she should record the song. The rest of the story is history.

Nikki Lamborn and Catherine Feeney of Never The Bride were spot on. "The Living Tree" is a signature Bassey tune that soars in full splendor with a big orchestral arrangement and that voice that, quite frankly, never gets old.

Bassey is a queer icon who contributes her large gay following to "the gowns, the glamour, the voice," according to an interview with The Telegraph. "And don't gay men adore strong, dominant, powerful women? Talented women," she corrects herself in the intervoiew. "I suppose their mums are very powerful figures in their lives."

All of her fans can prepare for a full Bassey revival this year. A performance at the hip 2007 Glastonbury Festival will be one of the highlights for the singer this year. She even keeps up with contemporary pop music and recorded a fantastic cover of Pink's "Get The Party Started" that might have you drool. Listen to it here.

You can download the Shirley Bassey's "The Living Tree" with mixes by Stuart Critchon and Shaken & Stirred on iTunes worldwide.