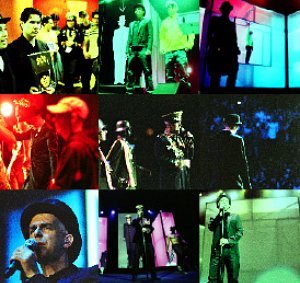 Warner Music will be releasing Pet Shop Boys' "Cubism Live" DVD on May 21. It is a "glittering" 27 track live performance DVD that was filmed in high definition on November 14, 2006 in Mexico City at the Auditorio Nacionale. The title of the disc obviously refers to the clever, neon-lit stage props the duo used during the tour.

The disc will not only feature the entire live set but also behind the scenes extra footage filmed in Mexico, a picture gallery, audio commentary and a 12 page book written by Neil and Chris and featuring photography from the show. The spectacular show was directed by David Barnard whose previous credits include the live concert films of Björk and Gorillaz. The DVD includes a slip case cover - half the stock will feature Neil Tennant and the other half will picture Chris Lowe.

Pet Shop Boys. Digital. High-definition. Twenty-seven tracks. Need I say more? Seems like a DVD to have for all the PSB fans. (Full track listing after the jump.)

God Willing
Psychological
Left To My Own Devices
I'm With Stupid
Suburbia
Can You Forgive Her?
Minimal/Shopping
Rent
Dreaming Of The Queen
Heart
Opportunities/Integral
Numb
Se A Vida E/Domino Dancing
Flamboyant
Home And Dry
Always On My Mind
Where The Streets Have No Name
West End Girls
The Sodom and Gomorrah Show
So Hard/It's A Sin
Go West