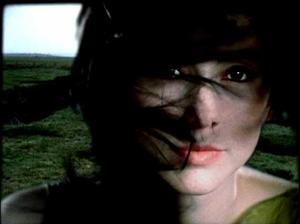 Kate Havnevik's "Melankton" is one of the most noteworthy albums of 2007 so far. I previously labeled the singer as one of those precious little gems you should know about. Hailing from Oslo, Norway, Havnevik's ethereal electro-pop is reminiscent of Imogen Heap, Dido and Bjork, but the singer's music has that brisk and crisp Norwegian feel that is distinctly hers.

Universal Republic released "Melankton" back in March with the track "Unlike Me" as a single. It is a song that Havnevik wrote for everybody who is "trapped" and feels different. In an exclusive interview with Arjanwrites.com, the singer confides that the song was inspired by her own experience of feeling like an outcast. (Download a guilt-free MP3 of "Unlike Me" HERE.)

I met the Norwegian singer while she was on tour with AIR. We talked about her inspirations, her work with Guy Sigsworth, the comparisons to Bjork and Immi Heap and her love for books and fairytales.

(Read the entire interview after the jump.)

How has the response been to your live shows with AIR here in America?
It's been going really well. I think AIR fans really appreciate my music and it is just great to be out here and playing shows.

I heard "Melankton" for the first time in September of last year. It is great news that the album is finally available in the U.S. now as well.
Yeah. I've seen you've been very supportive on your blog. Rob from Temposhark forwarded it to me. I love your blog and I saw you wrote about William Besson as well a few weeks ago. I'm a huge fan of him.

Your music packs a whirlwind of emotions that can make listeners either feel very happy or very sad depending on the moment they hear it. Is that reflection of your own character? Are you moody?
Yeah. It is funny for me talking to somebody about that. I can be very moody indeed. I find I have a lot of sad emotions. But of course I also have my happy moments. I think everybody goes through their ups and downs. All of my life I've been quiet, keeping things to myself. I guess I am an introvert. I'd like to listen to my music with headphones on for example so I nobody can hear it.  It is quite interesting that you can hear that in my music.

Your track “Unlike Me" is a song about feeling different and finding your own way that I think a lot of people can relate to.
I think it is great that a lot people can identify with the lyrics of that song. It raises questions about where we are and why we are here in this world. I also express that I am being totally myself, not pretending to somebody else or just an image. I didn't expect that so many people would identify with that song, but I'm very happy about it.

Was there a specific event in your life that triggered that song?
It was not necessarily one event. It was one of those days that I was feeling quite lost. I was sitting by my computer and instead of writing lyrics, I wrote several pages of just random things I was feeling. I was feeling a little paranoid and I was feeling like an outsider and I had all these different emotions racing around in my head. I was worried about a lot of things and when I wrote the song, I actually just looked at these sheets of words and sentences that I randomly put down. I wrote the lyrics by putting together the phrases that made the most sense. A lyric like "There are no guarantees in life" really captures my feelings very well. There are no guarantees for anything really. You have to try to create your own life.

Have you ever felt like an outcast?
People have always thought that I was very strange. And I was just trying to be myself. I didn't want to take on a different persona in the hope that people would like me better.  I am just being myself.

Was there a reason why they thought that you were strange?
I think it is just the way of behaving. Keeping to yourself, being an introvert, not giving everything away and telling people everything about yourself. A lot of people find that strange. I don't know. It is just a feeling that I've had since I was little.

You’ve done a lot of vocal work before releasing this album. I know about the work you did with for Royksopp, but I was surprised to hear that you did something with Britney Spears. What happened?
Well, I didn't exactly do something with her. My good friend Guy Sigsworth wrote and produced a few tracks for her. One late night he called me asking me to help out with some backing vocals. You can hear my vocals on "Somewhere (You Will Understand)." I did it as a favor to Guy. I was never paid for it. [Laughs]

Are you going to work with Royksopp again?
Kate: I am not going to do anything on their next album. I think that they are going after a different angle for this new record they are working in.

You seem to have struck a great chemistry with Guy. How did you meet and decide to work together?
It was few years ago when I was in London and I was looking for a producer. I contacted Guy just out of the blue because I wrote down a list of producers that I wanted to work with. I didn't set any limits for myself, I just wanted to try to work with certain people and see how it would play out. I contacted his studio number and talked to him. And he was nice on the phone but he was quite busy and wanted me to call him a week after. We agreed to meet up and we connected and became really good friends. We started writing some songs together every now and then when he had a moment of spare time, which is not very often. [Laughs] And it was kind of funny because it was around that time that he also started to work with Madonna.  I had a session scheduled with him and he called me a few minutes  before I was about to head over to the studio and he said, 'We can’t do it today. Madonna is coming over.' It was funny.

What has Guy added to your music?
It is hard to describe but he has a great feel for sonics, electronic music and that processed sound that he makes himself. It adds a zing to my music. I think he really inspired me to use electronic sounds and to sample things. He is also a very good writer. So it's very inspiring to work with him.

A lot of people are comparing you to Imogen Heap and Bjork. How do you feel about that?
I think it has to do with Guy’s production and perhaps because I have an accent like Bjork. But Guy only produced four songs on the album and there are twelve songs in total. So that's important to know as well. I think it is great to be compared to those two. Imogen and Bjork are great artists.

Your music is like reading a great novel. Are you inspired by movies, books and soundtracks to get your imagination flowing?
I am very inspired by films, film music, books I read and by art. Actually the title "Melankton" comes from a Norwegian book called "The Explorer." It is a tale of a guy who grows up in Oslo. It is not that the main character that is called Melankton, it is actually a side character. But I just fell in love with the name, and I think the name Melankton has a certain electronic and melancholic feel to it. It also means black rose in Norwegian. And so I think it was very well suited for the album.

When I read books I underline certain things. It is not that I read something specifically that I'll use but it often triggers an idea about something and I have to take notes. Sometimes it is annoying to take notes. So I just fold the page and get back to that page by the end of the story. So I think words are really inspiring.

In Scandinavia fairytales are very much part of the cultural heritage. Your music has the same imaginative quality that you find in fairytales I think.
That's very true. We are brought up with a lot stories about the forests and mountains. I think the nature inspires the stories and fairytales because the landscape is so dramatic and also the seasons are so strong and we have very long dark winter seasons. It becomes a part of our lives.

What are some of the albums and the artists that you are enjoying yourself right now?
I am really enjoying of course the new AIR  album and I like Thom York's "The Eraser" a lot.