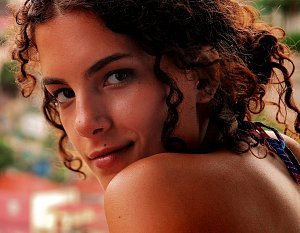 If you have walked into a Starbucks recently, chances are you have seen a CD by Brazilian singer CéU at the barista counter. Indie label Six Degrees Records and Starbucks Hear Music Have teamed to release CéU's self-titled debut album in the United States.

CéU's (pronounced "cell with a light L") full name is actually Maria do CéU Whitaker Poças, but she goes by the simple moniker CéU. It is a name that when translated into English means "sky" or "heaven." She is a singer, songwriter and guitarist whose music is primarily influenced by samba, Brazil's infectious rhythmic style. She gives it a contemporary flavor by blending it with hip-hop, jazz and soul to create a unique sound of her own. CéU got a taste of all these different genres when she lived in New York City and fell in love with singers like Lauryn Hill, Billie Holiday and Bob Marley.

The singer got a first taste of fame was nominated for a coveted Latin GRAMMY in 2006 in the "Best New Artist" category. So after singers like Bebel Gilberto and Cibelle, CéU is the next female Brazilian singer to serve up an irresistible sound that is bith authentic and contemporary. But most importantly, CéU's laid-back music wants me to travel south and take a vacation.

Download a guilt-free MP3 of "Ave Cruz" the only track on the album that was not produced by Beta Villares. This track got the soundboard treatment from Brazilian film composer Antonio Pinto.

[This post was written in support of Madonna's Raising Malawi. Donate today. Email me if you have suggestions for Global Beats. Find previous installments of Global Beats here.]