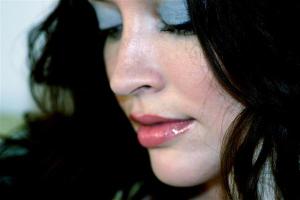 Emerging pop singer Di Johnston has an interesting background. She was born in Hong Kong as the daughter of two American diplomats. In her late teens, she moved to the U.S. to start a career as a voice-over actress in New York. She contributed her voice to many television commercials, including ads for Lincoln Mercury, Lenscrafters and Pantene.

While in New York,  Di Johnston set her sight on becoming a singer. She hooked up with producer Dave Liang from the Shangai Restoration Project. Liang tries to bring an authentic Asian vibe to the pop mainstream by fusing traditional Chinese instrumentation with hip hop and electronic music. Johnston and Liang initially collaborated on the track "Jade Buddha Temple" that was featured as the single of the week on iTunes Japan and played on KCRW's "New Ground."

"There is a void of Chinese American music given all the recent political and commercial attention on China," Liang writes on his web site. "My aim with this project is to capture and reflect that tension while introducing new sounds that result from the fusion of the two cultures."

Liang and Johnston decided to continue their collaboration and work on an EP together. Johnston "wanted to mix in some Chinese instruments as a nod to her upbringing, ad (. . .) tackle the ubiquitous theme of flawed love without taking the subject too seriously," according to a press release. The result is "The Shanghai Restoration Project Presents: Di Johnston" that was digitally released in April.

Lead track from the EP is the "Trite" that you can download below as an MP3 totally guilt-free. It is a cute little electro pop gem with a crafty layering of lush electronic instrumentation and Johnston's vulnerable vocals. Liang should have considered using less of the vocoder to have Johnston's natural voice shine a little more. But then again, it adds to the whole electronic feel of the song. (Click here to purchase the "The Shanghai Restoration Project Presents: Di Johnston" on iTunes.)