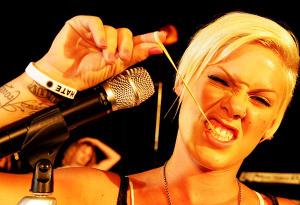 All of a sudden Pink is rearing her spunky colored head in the charts again. It seems it has taken forever for her last single  "U + Ur Hand" to catch on, but it finally has, and the song is number nineteen on the Billboard Hot 100 this week. It is by far one of the catchiest, all-round pop tracks on Pink's last album that bursts with her signature girl power. The kind that even parents can approve of.

Pink's recent tour with Justin Timberlake has clearly created more momentum for the singer. She desperately needed to gain more traction after the lackluster release of her third CD "I'm Not Dead" last year. Besides the attention-grabbing video for "Stupid Girls," Pink has not had the commercial success she deserves. This puzzles me. She should be up there with the Timberlakes and Furtados of this world, but for some reason it is not clicking for her yet. Perhaps her second album turned off too many people or maybe her in-your-face lyrics and antics are just a bit much for the mainstream. I hope she sticks to it though, because it is what makes her unique and refreshing.

Watch an excellent, roaring live version of "U + Ur Hand" that she performed at London's Wembley Theatre (comes with the appropriate hand gestures). The footage is taken from her new DVD "Live From Wembley Arena - London, England" that will be out in stores next week.