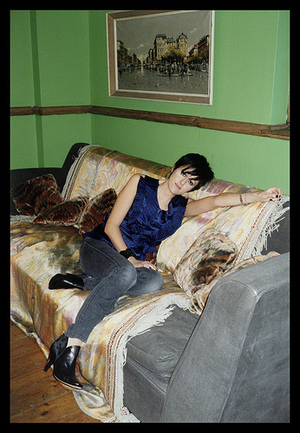 In the final part of "Ask The Artist" with Tracey Thorn,  the singer talks more about her inspirations, guilty pleasures, being a mother and her admiration for Jake Shears and Billy Ray Cyrus. I love her candor and sense of humor. It totally fits the feel that I get from her music. (And I really think that duet with Neil Tennant should be arranged. It sounds doable, no? )

I agreed to limit my number of questions for her, and fortunately I was able to bundle some inquiries since many of you asked about her inspirations, touring and the future of Everything But The Girl. (Tracey: Feel free to email me if you don't mind answering a few more at a later time. Thanks!)

Question from Shaun: Which albums (by other artists) or books would you say have had the biggest impact or influence on your life?
I always quote Patti Smith's "Horses," as do so many other people, but it really did give me kick up the arse. But there are so many really - Dusty in Memphis, the first Smiths album, etc etc.

Question from Markus: The classic "Apron Strings" and new song "Nowhere Near" are two plots of the arc of motherhood/family life. In what ways has family life informed - good or bad - the new record?
Yes, "Apron Strings" is my "before" song - its very yearning and a bit sentimental about the notion of having children. I wrote it when I was first alerted to the idea that children might be a good thing, which was when my sister had her kids in the '80s. The song is partly addressed (as also is "These Early Days" on "Idlewild") to her son, my nephew, James.

"Nowhere Near" is my "after" song, and is the voice of experience! It admits to the darkness which is part of the reality of motherhood - spending all day shouting at kids at the end of the long summer holiday, feeling like a sergeant-major in uniform. But then watching a news item (in this instance it was seeing the Pakistan earthquake reports on the telly - people carrying their children, and the bodies of their children, from the ruins of their homes and down from the mountains) and going up to look at your sleeping kids and counting your blessings that they exist and are safe. Its about how actual motherhood means experiencing ambivalence.

Question from Markus: When was the last time you shook your hips in a cheap way and where was it?
SoBe Live, Miami Beach, March 2007. Ben's buzzin fly set, 3am, I was DEFINITELY shaking my hips in a very cheap way with Alex Santos, and he was playing air keyboards, as I remember.

Question from Gulius: Since you realized you wanted to sing again thanks to Neil Tennant, have you ever thought about a collaborations between the two of you?
I am simply waiting to be asked, as I have been for many years.

Question from Kyle: If you could create an alter-ego, which explores music in a completely different genre, what would that sound like?
PJ Harvey. I do sometimes envy the ability to rock out. In other moods, I feel I would just like to be Jake Shears really - a completely exhibitionist, sequined entertainer, but with depth.

Question from W. Briski: What are your guilty pleasures (besides Abba of course)?
No guilt is ever attached to liking Abba. At the moment I guess my guiltiest pleasure is Hannah Montana (if you don't have pre-teen daughters you won't have heard of her, so don't worry). She is the daughter of Billy Ray Cyrus. They star together in a TV show, and I find both of them enormously likeable, and I even like the songs, and really, there is no way on earth that any of it is cool, or appropriate for someone of my age and supposed musical tastes. She is adorable though.

(Read Part 1 of this interview.)