arjanwrites.com: The Feeling at Coachella

The Feeling at Coachella 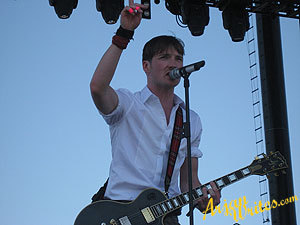 The Feeling has come a long way since performing for tourists at bars in the Swiss Alps. Right after Mika and rapper Lupe Fiasco, the band played a 45 minute set on the Coachella mainstage. I had not seen the band live yet, but I was very impressed. All neatly dressed and perfectly coiffed, the group turned it up a few notches and totally rocked their brand of slick, melodic pop.

They are all very accomplished showmen, especially singer Dan Gillespie-Sells and bassist Richard Jones (husband to Sophie Ellis-Bextor) who both really got into the swing of things running back and forth across the stage. Gillespie-Sells even got a little rebellious and started kicking the hi-hats at the drum set during "Love It When You Call."

Other songs they played included "Helicopter," "Sewn," "Fill My Little World" and "Never Be Lonely." They also threw in a cover of Bugles' "Video Killed The Radio Star," wich engaged the audience more than the other songs that most had not heard before.

We all know that Dan is not a man of secrets and can't really hide his true colors. So I couldn't help but to smile when he introduced the last song "Love It When You Call" with "I will leave you with this little tune, my darlings." Hilarious.