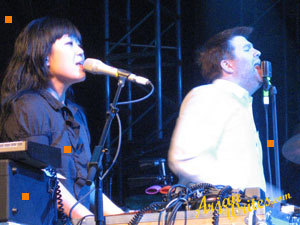 Last night, Tiesto closed the day on the mainstage. This was the first time in the history of the festival that a DJ gets this honor. I spent time with Tiesto in his artist trailer right before his gig. Much more about that later.

LCD Soundsystem (pictured above) played at the Sahara dance tent on Saturday night. It was odd to see the band play in front of hundreds of kids with glow sticks. It just didn't fit.

I spotted many celebrities in the VIP area at Coachella including Cameron Diaz, Drew Barrymore, Adam Brody, CSI Las Vegas' Gary Dourdan and Tara Reid (who was stumbling and drunk).

Cameron Diaz had no luck when she was trying to find her way out of the VIP section. She walked right into the area where photogs were having dinner. Oops! A few of them tried to snap her picture, which she wasn't very happy about. Instead of continuing her pace, she stopped and tried to reason with them. You'd think she is used to it by now.

Rufus Wainwright looked dandy yesterday for his Coachella gig. It was lovely, but I wasn't feeling Wainwright's sophisticated sound in a festival environment. It doesn't do him justice.

Hot band to watch is !!! that is pronounced as chk-chk-chk. After raving about The Arcade Fire and Tokyo Police Club this is what the hipster kids are talking about. (And my new girl pal at EW agrees.)

I had very little sleep but I'm off to go see Mika and The Feeling open the last day of the event on the mainstage. Stay tuned.