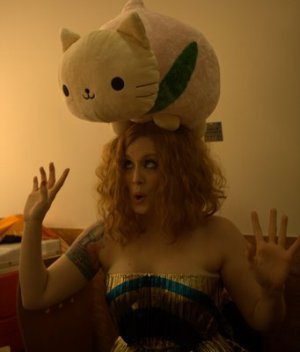 It looks like Ana Matronic is trying to live in cartoon motion, skillfully balancing that Miffy looking doll. Scissor Sisters has been everywhere lately, performing shows in Asia, North America and Europe. Time to get you up to speed with all that's hot and happening in the amazing world of Scissor Sisters. A brief run-down of current news items:

Scissor Sisters filmed the video for their upcoming new single "Kiss You Off" in London this week. I'm glad Ana is getting her time in the spotlight for this one. The video was directed by Robert Hales (Gnarls Barkley, Nine Inch Nails) and styled by Zaldy. Some exclusive photos from the set coming to you next week.

Jake Shears sings "R.E.S.P.E.C.T." on the online Pancake Mountain Show. I'm not familiar with this internet program, but it looks like Jake and Paddy are being interviewed by a sheep puppet. Nothing like Triumph, the insult comic dog, but still entertaining to watch.

Head over to YouTube to watch unique behind-the-scenes footage that was shot during the filming of "She's My Man." It shows how the unique Kuroko concept came about and created one of the best Scissor Sisters videos to date.

Jake is working on a few songs with Kylie Minogue for her upcoming new album. One of the tracks he wrote is "White Diamond" that the pop princess already showcased during her recent shows.

Hayseed Dixie did a totally fun cover of "I Don't Feel Like Dancing." Watch it here.

That photo of Ana Matronic on top was shot during the group's recent Japanese tour.