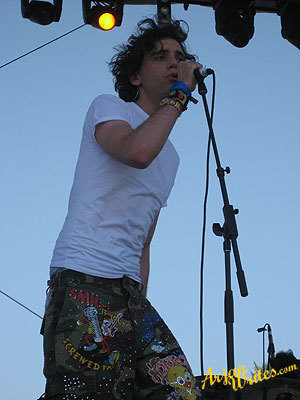 "Last year, we were playing Manumission in Ibiza and now I'm at Coachella," Mika said during his gig at Coachella. "I can't believe it!" And he is absolutely right. It has been an incredible year for Mika so far. He is now considered a bonafide pop star in the U.K. and he is working hard to get chart success in North America as well.

His show at Coachella marked the beginning of a busy touring schedule for the Brit. He is scheduled to perform at several festivals in Europe later this spring, and he is also coming back to the U.S. for a mini tour in June.

It was an interesting choice to have Mika open the festival day on Sunday right smack on the headlining stage, the big one. I wasn't sure how he would go over with the crowd of boarder dudes and rock chicks who had settled early in front of the stage to wait for the performance of Rage Against The Machine later on Sunday.

But Mika held his own for an action-packed, vocally strong 30 minute set. Dressed in a simple white tee and "cartoon motion" military pants, he performed a solid show that included "Relax," "Love Today," "Billy Brown" and "Big Girl." He even got some of those tough dudes in the crowd to loosen up a little and bounce up and down, which is quite an accomplishment.