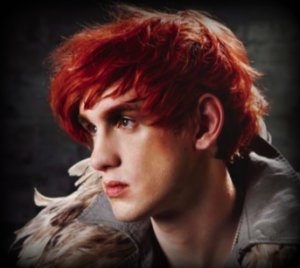 Some have called Patrick Wolf an eccentric clone of Mika while others like to think of him as a new member of Scissor Sisters. But all of these comparisons are a bit silly. Wolf is an artist who has carved out a niche of his own with his exuberant electro-pop ever since he released his debut in 2002.

Wolf, 23, is a multi-instrumentalist from London, England who was raised in a very creative household. He started his musical career playing the violin in church as a kid and experimenting with other instruments in art collectives as a teenager. I think his experimentation has helped Wolf not to think in terms of genres, but rather in terms of sounds and innovation. He is not limited by what people expect, but rather he is driven by musically challenging himself that has gathered the interest from listeners.

The singer has not only captivated audiences with his unique brand of pop. Wolf's androgynous appearance has been the topic of much speculation. Music Slut quotes from a recent interview Wolf did with British gay magazine Attitude. "I don’t like gay ghettos or straight ghettos. I like it when an artist isn’t about their sexuality, but their music first," he says. "I’m the only person who knows me, so I’m never going to fit in any of the boxes in the same way that I’m never going to say I make a particular type of music – I’m not a pop musician, I’m not a folk or a rock musician, I’m Patrick."

In Attitude, he also talks about suing his high school about their their views on gay people. "They had said that they couldn’t help me with my bullying because I was of an ‘effeminate disposition,'" he said. "So I took them to the European Court of Justice when I was 15, won, and bought a piano with the money I was awarded."  (You can read the entire Attitude interview HERE.)

The artist's third album "The Magic Position" will be released in the U.S. on May 1. Get a taste of Wolf with a guilt-free MP3 download of a special promo version of the disc's title track. Whether it is your thing or not, you'll have to agree with me that Patrick Wolf is a rare original.