arjanwrites.com: Free Download: Charlotte Gainsbourg "The Songs That We Sing"

Free Download: Charlotte Gainsbourg "The Songs That We Sing" 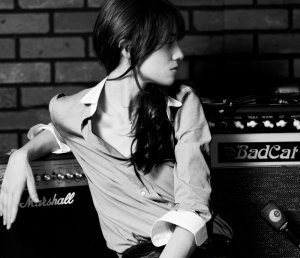 The French have a knack for making everything a bit more classy and chic at times. Not only in their cuisine and fashion, but also in their music. Sometimes it is dowright pretentious, but often it is simply brilliant. Take for example the music from Charlotte Gainsbourg. The French actress and singer gathered a fine group of songwriters and producers that help her craft "5:55," one of my favorite albums of 2007 so far. It will hit stores in the U.S. on April 24.

Charlotte is the daughter of famed French singer Serge Gainsbourg and British songstress and actress  Jane Birkin. You might remember that lusty love song "Je T'aime Mais Non Plus" the couple recorded in 1969. Over the years, Charlotte, now 35, has fully stepped away from her parents' shawdow and built a n impressive career of her own.

In 1984, she made her acting debut and since then she has played it numerous movies that have garnered her many awards and plenty of critical-acclaim. Noteworthy detail is that Madonna sampled Charlotte’s voice – an extract from one of her films – as the intro to "What It Feels Like For a Girl" in 2001.

The idea for "5:55" was born when Charlotte met Air's Nicolas Godin at a Radiohead concert in Paris. He invited Nigel Godrich to work with him and Charlotte on an album after Godrich previously produced Air and Radiohead. The chanteuse also invited esteemed lyricists Jarvis Cooker and the Divine Comedy's Neil Hannon to contribute to the record.

The result is an album that combines both style and substance. The delicate and delightful "The Songs That We Sing" is a good example of that. The song makes a statement about Western consumerist culture. "I saw a photograph a woman in a bath of hundred dollar bills. If the cold doesn't kill her, money will," she sings. Tres magnifique! (Click here to pre-order "5:55" on Amazon.)

Download Charlotte Gainsbourg "The Songs That We Sing" [MP3]