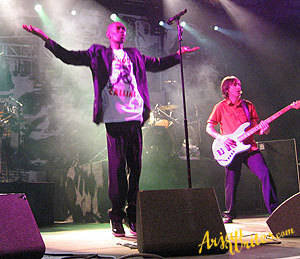 The second show that really impressed me was Faithless' show in the Sahara dance tent in the early evening. Fronted by the enigmatic Maxi Jazz, Faithless came as a full live band including guitar, bass, drums, percussion and synths. The band started out with a rocked up version of "Insomnia" that drove the crowd into a steaming frenzy. Maxi Jazz led the gig as if it was a religious mass with his arms often spread out reaching out to the sky and making the victory/peace sign. Many of their hits followed such as "God Is A DJ," "Mass Destructions" and "Bombs." Sister Blis looked fierce orchestrating more than 6 keyboards  Darn, this is a really, really good band. Time to put out their new disc in America.