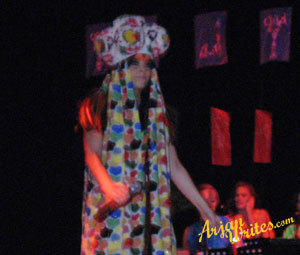 And then there was Bjork. Iceland's innovative artist appeared on the headlining mainstage around 11 p.m. for her much-anticipated show. The field was packed with people curious to see what Bjork would come up with for this very special event. Even the photo pit right in front of the stage had five rows of photographers vying to get the best shot.

The set up of the stage was simple. A few "Volta" inspired flags and a colorful group of back up singers and musicians was all that filled the stage. No frills. Lasers were used to add to Bjork's magic.

The singer wasn't announced. She just sort of appeared much to the surprise of the audience. She wore an out of this world, colorful costume that is hard to describe. It is the Last Emperor meets Joseph and the Amazing Technicolor Dreamcoat in outerspace. Have a look at it and come up with your own description. She kicked off with the new single "Earth Intruders." The set continued with many old favorites, including "Army of Me," "Hyper-Ballad," "All Is Full of Love," "Pagan Poetry" and "Joga."

I have always been intrigued by Bjork more than I am a fan. Seeing her in concert is a fascinating experience. She is a freak of nature who doesn't really perform. Her show is more like a ritual with its tribal beats and her primal vocal style that sent chills down my spine.