arjanwrites.com: A Quickie With The Bravery

A Quickie With The Bravery 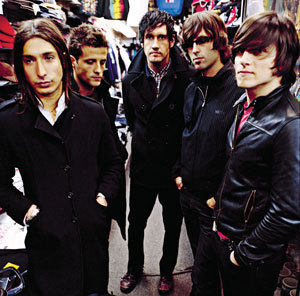 The Bravery is releasing their much-anticipated new album "The Sun And The Moon" on May 22. After the electronic edge of their first album, this new CD promises to show off the band's rockier side with both uptempo and slow songs. Stream the group's new single "Time Won't Let Me Go" and the album track "Every Word From Your Mouth Is A Knife In My Ear"  to get a taste of their sophomore sound.

While the rest of the band was in a meeting with their manager, basist Mike "Dirt" Hindert gave me a brief call to talk about The Bravery's new album. Real quick.

Hindert (pictured second from the left) joined the group after his friend guitarist Mike Zakarin reponded to an ad posted by singer Sam Endicott who was looking for new bandmates. Hindert started playing the bass guitar despite the fact that he'd never played the instrument before. The handsome bassist (with his signature eyeliner and rockabilly style) talked for a few minutes with Arjan about the new record.

Read my brief chat with Mike after the jump.

What can we expect from the new record?
The first one was really fast, upbeat and dancey. This new record is a lot more organic. We have pianos, we have strings and we even all sing on it. We switch it up between uptempo and slower songs. We have some punk-rock stuff and even a waltz!

You recorded the CD with producer Brendan O'Brien in Atlanta. What did he add to the mix?
He's a great chill guy and a great musician. We never worked with a producer before so having an outsider that knows rock music to give his perspective was very valuable. Without him, it would have sounded completely different.

You have been criticized by rock purists that your previous album was too dancey.
Yeah, we sorta felt that. Our second album will back up that we are real musicians not just something electronic.

How did the name "The Sun And The Moon" come up?
It is  part of a lyric in a few songs and reflects the theme of the record. It reflects the contrast of songs and moods on the album also.

Sam said during a show that the song "Every Word From Your Mouth Is A Knife In My Ear" is statement about politics in the U.S.. Can you elaborate?
Sam wrote that song so he can better comment on that. But I can say that he had a certain mindset about the state of American politics when he wrote the song.

I noticed a change in your style and image. No more eyeliner for you?
[Laughs] Yeah, we had to change it up a bit although I liked how it made me look. It was just a lot of work sometimes during touring to put all the make up. In the end we just wanna get out there and play. It was something that our gay fans always pointed out, which I think is very cool. In general, we get our style from different musical influences. I like to buy all my clothes myself and have it tailored. Nothing ever fits me because I'm skinny and I like it tight.

Did you shoot a video for "Time Won't Let Me Go"?
We just did actually. I can't reveal too much, but it features the band and the world champion card stacker. He's in the Guinness Book of World Records for building the tallest and biggest house of cards.

You have been touring relentlessly for the last two years. Are you ready to go back on the road?
Yes, yes, yes! I got bored when I'm not touring with the band.

Have you ever played your bass so hard that it made your fingers bleed?
Yes, actually. During a concert in Singapore. I just put a band aid on and got drunk and everything was okay. [Laughs]