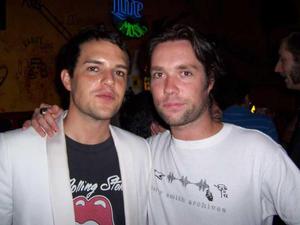 Here's a cute little tidbit for you that I found on the KillMeNow fan board. Crooner Rufus Wainwright gives in to his Killers obsession and has written a song about Brandon Flowers titled "Tulsa." The track will be included on his new album "Release The Stars" that is partly produced by Neil Tennant of the Pet Shop Boys.

"I don't know [Brandon] that well," Wainwright admits in an interview with Time Out, "but I wrote this song about him which is kind of hilarious - it says he tastes like potato chips in the morning." Cripsy and salty? I'm intrigued. Love to see those two on stage together sometime. That would be a slightly odd but very melodic pairing.

[Update #1] A reader of OklahomaRock.com writes how the song came about. "The story goes that Rufus went with a fan to a gay bar in Tulsa after his last show here only to be turned away because he didn't have his ID. They then went over to Caz's where low and behold, Brandon Flowers and the rest of The Killers walked in and that night is where this song stems from. The picture on [Arjanwrites.com] was taken at the bar."

[Update #2] Some Killers fans found the lyrics on the Rufus Wainwright messageboard and they are sooo sweet:

"You taste of potato chips in the morning.
Your face has the Marlon Brando club calling.
And then the thought that I owe it all to Tulsa.
And that fat guy with the Queen shirt that we both signed together.
Wanting it for someone who'd been down forever.

Your suit was the whitest thing since you-know-who.
I feel that that saviour I've been may be you.
And then the thought that I owe it all to Tulsa.
And that poor girl who waited in the rain for hours to meet me completely.

And I owe it all to Tulsa
Just a reminder
Of the antiques shop I want to go back to and visit when it´s open
In Tulsa, Oklahama
This song's about you.