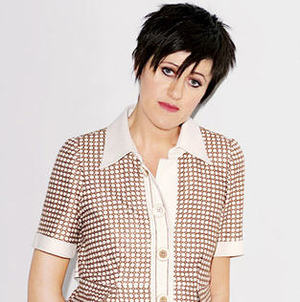 (UPDATE: Unfortunately, I can accept any more questions at this time. Thanks for understanding!)

Tracey Thorn has released a sublime new album and she wants to talk about it with YOU!

I'm thrilled that Tracey Thorn has agreed to do an exclusive interview with Arjanwrites.com. Instead of me coming up with questions, I'd like to give you the opportunity to submit questions for Tracey. Let's get the entire Arjanwrites.com reader community involved!

Email me or write up your questions in the comments section before Wednesday, April 4.

I can't guarantee I will able to include all of your questions in the interview, but I'll do my best. Of course, I will print the entire chat with the singer on Arjanwrites.com. If this works out well, I want to go ahead and do similar "Ask The Artist" reader interviews in the future and give you a little bit more access to artists you are listening to.

Tracey is very picky about granting interviews, so make sure to take advantage of this opportunity. While you are coming up with your clever, fun and intelligent questions, listen to her brand-new album "Out Of The Woods." It's fingerlicking good!

Listen to Tracey Thorn "It's All True" [real]


You either going to love or hate MOTOR's new single "Bleep #1." To some this adrenaline-fueled techno crunch will be a perfect soundtrack to a wild night out while others might experience it as a violent kick in the stomach. But whether you are a lover or a hater, the song has a very cool, artsy video that was released this week. The video flickers so insanely fast that it makes you wonder if there's some hidden subliminal advertising message.

"The song is a modern homage to the early '90s techno bleep sound made popular by LFO, Sweet Exorcise and Tricky Disco," MOTOR's Bryan Black tells Arjanwrites.com in an interview. "We purposely sped up the tempo and created a more maximal sound to match the tone on our new album, 'Unhuman.'" The duo's new disc will be available on May 22.

The video for "Bleep #1" is an experimental piece of art without a particular storyline, but its distorted graphical approach perfectly fits the music of Bryan Black and Mr. No.

The video was directed by Woody Batts who previously worked on the group's "Sweatbox." "We felt the song was best captured visually, at about 4 a.m. in the basement of a Berlin club," Black explains. "The subject should be oblivious to anything other than the music. We decided to shoot a single model on a clean background and have fun with post production, using graphical masks and shapes to hide and reveal her motion at different speeds." (Click here to purchase the "Bleep #1" EP with remixes on iTunes.) 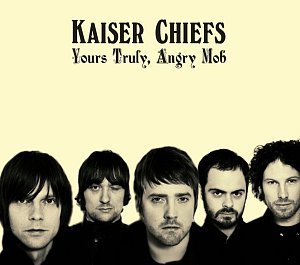 Kaiser Chiefs have a knack for writing songs that burst with melody but still have a crunchy edge. Their latest single, "Ruby," is a good example of that. It is a fresh slice of guitar-driven Britpop that even includes a subtle synth riff that will help their appeal to the mainstream. It is a straight up tune about falling in love and the stir of emotions that goes along with that. "Let the clocks be reset and the pendulums held. 'Cos there's nothing at all 'cept the space in between us," sings Ricky Wilson. It is nothing genial, it is just darn catchy. The single is taken from the band's much-anticipated second album "Your Truly, Angry Mob" that was released in the U.S. earlier this week. (Thanks to Robbie M. for allowing me share this link. Click here to purchase "Your Truly, Angry Mob" at iTunes.)

And the circus continues. Curly-haired crooner Chris Sligh was axed from American Idol last night. Voters weren't too impressed with his rendition of The Police's "Every Little Thing She Does Is Magic" on Tuesday.

But don't you worry about a thing. He may still have a second chance at a recording deal. Sligh's "former" band, Half Past Forever, recently submitted the music video "Know" in the online video music competition, Music Nation, where artists compete for a recording contract with Epic Records.

You might be in for a surprise. It starts out as a bland acoustic session, but wait until the the full thing kicks in around the 0:48 second mark. It is a decent pop rock tune with a peppy chorus, a dramatic string section and sugar sweet harmonies that sound a lot more polised than what Slight has been belting out on American Idol.

Stream The Cliks "Cry Me A River" (Justin Timberlake Cover) 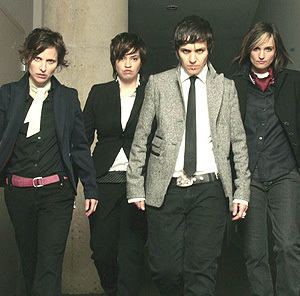 The Cliks look as fierce as they sound. This Toronto based rock quartet makes music that is equally raw, bold and still very melodic. The group is currently touring North America to promote their upcoming album "Snakehouse" that will be out on April 24. The disc will be released on Tommy Boys' Silver Label that focuses exclusively on developing and marketing gay and lesbian projects.

The group is the brainchild of singer Lucas Silveira, a transgendered male, who started to write songs in 2005. After multiple personal crises, Silveira climbed back up and started to come to terms with his individuality. "They say when it rains, it pours, and that essentially happened to me before the creation of this album,” Silveira says in a press statement. "I went through a complete lineup change after having made a name for the band in Toronto. While this was happening, a relationship that I’d been in for nearly seven years fell apart, my father suffered a stroke and I had a nervous breakdown—all this crazy shit at once." Much of the lyrical intensity and powerful sound on "Snakehouse" was inspired by this time in Silveira's life.

Things started to look up for Silveira when he met drummer Morgan Doctor and bass player Jen Benton at a local watering hole in Toronto. They immediately struck a musical connection that led to  the formation of The Cliks. The group went into the studio with producer Moe Berg to begin work on "Snakehouse." The trio also added guitarist Nina Martinez to their line up.

"This is music that seems to emanate from a parallel universe, one where fundamental distinctions are blurred," boasts a press release about "Snakehouse." It poignantly sums up the group's genre-crossing sound and androgynous appearance that makes them stand out from the pack.

One of highlights on "Snakehouse" is The Cliks' cover of the Justin Timberlake smash "Cry Me A River." The group has turned the pop singer's original into a hooky pop rock anthem with a throbbing reggae beat that will surely be a crowd favorite. (A big hug for Rosie for allowing me to stream this track on Arjanwrites.com. Click here to pre-order "Snakehouse" at Amazon.com)

Stream "Cry Me A River" by The Cliks: