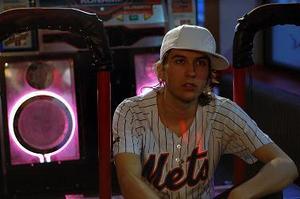 Hailing from the pop empire of Sweden comes Kocky who serves up a mighty fresh brew of hip hop, pop and techno music on his new mixtape "Wear The Crown." Consider this digital-only release a "pre-party" to Kocky debut artist CD that will be out in the next few months. Kocky is signed to Lo-Fi-Fnk's Lavida Locash label, which gives you an idea of the electro-infused pop beats Kocky cooks up.

Kocky is the alias for hip hop producer Soul Supreme who has worked with multiple American MCs such as Big Daddy Kane. His love for old-school Harlem hip hop beats and Lavida Locash' knack for next generation electro pop led to the creation of his new moniker Kocky. A press release clearly describes the artist's muscial goal, "Kocky's music ranges from high to low in dance-music but always with a strong will to push things forward." That says plenty.

Check out the guilt-free MP3 download of "Crush" that is taken from his new mix tape and features Play Paul's vocals. You must also listen to Kocky's popped up revamp of Cassie's mega hit "Me + U" on his MySpace page. He added some glowing strings and that darn infectious little whistle. It is hella good.