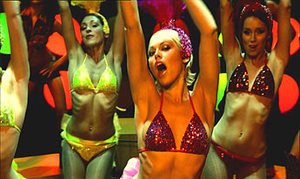 Freemasons shot to fame last year with their discopopsouldance brew "Love On My Mind." Now, the duo is ready to do it all over again with their catchy new single "Rain Down Love." And this is not just any dance single, folks. This one features none other than Siedah Garret on vocals. Yes. That Siedah Garrett.

The video for the single is a tongue in cheek homage to Michael Gondry's video for Daft Punk's "Around The World." However, this one is a whole lot gayer with hunky sailors, frivolous show dancers and you might even spot some of the Village People. Watch the video HERE.

The single is taken from Freemasons debut album "Shakedown" that was released in the U.S. on iTunes this week. If you look to pep up your MP3 player for that work out you have been planning for days, this song will surely make you lift a little harder this weekend.

After Fedde LeGrand's monster tune, the Dutch are at it again. Check out "The Beat Is Rockin" by Dutch DJ/producer Erick E. It is another hunky piece of dancefloor energy that ruled the singles chart in the Netherlands for the past few weeks. Now, Eric E. is taking the songs to U.K. where it will surely do just as well.

This week, Ultra Records released an extended EP with the original "The Beat Is Rockin" and mixes on iTunes in the United States. Mixes were produced by Fedde LeGrand, Sneakerz, Gregor Salto and others (To make it a little easier to find it in iTunes' gigantic catalog, I've included the iTunes direct link button below.) 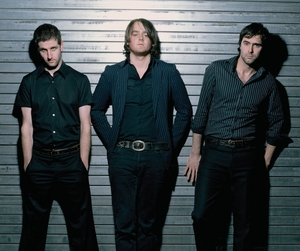 This week, Keane released another live set on iTunes appropriately titled "Live In London." After the digital release of their AOL studio performance and the University of London Union show, this live gig was recorded at the Apple store on Regent Street in London. The set features some old tunes and some new ones including "Everything Changes," "Somewhere Only We Know," "Crystal Ball," "Is It Any Wonder," the new single "A Bad Dream" and the sublime and much-overlooked "Nothing In My Way." The download package also includes a video of the performance, which makes for a pretty good value for all you video iPod junkies out there.

After lukewarm response to their sophomore album, Tom's stint in rehab and a cancelled U.S. tour, 2006 turned out to be a bit of a lost year for Keane.  This live EP shows, however, that the trio is an excellent live band with a knack for melody. Tom's voice is not always reaching those subtle high notes, but the "Live in London" EP  captures the distinct intimacy of an instore performance very well. Especially, the toned down version of "Is It Any Wonder" is worth a listen.

In related Keane news, you can now download "A Bad Dream" b-sides on 7Digital including the gabber house Luna-C remix of the song and the the group's  cover of The Cult's "She Sells Sanctuary." Also, look out for Keane at the Grammys next month. The group is nominated for Best Pop Vocals Performance By A Duo Or A Group for "Is It Any Wonder." 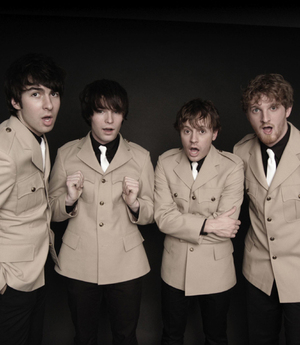 Locksley is the little indie band that can. Hailing from Madison, Wisconsin, the foursome of Jesse Laz (vocals/guitar), Kai Kennedy (lead guitar/vocals), Aaron Collins (bass, vocals) and Sam Bair (drums) take their inspiration from '60 Brit pop bands like The Kinks, The Hollies and The Beatles. They independently release their debut "Don't Make Me Wait" next Tuesday.

One of the best ways to get their music noticed is to tour and excite audiences with their "blistering live performances," as a press release put it. Last year, the group toured with OK Go, We Are Scientists and She Wants Revenge. This year, the band will be touring with The Rapture in February. I'm sure Fuse TV and MTVu will pick up this band sooner than later and help them break out from the indie circuit into the alt-pop world.

Download the track "Why Not Me" from ther debut album. It is an invigorating blast from the past with its kicky beats and hooky harmonies. This band burts with energy and they want you to have some of it. 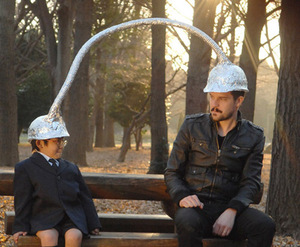 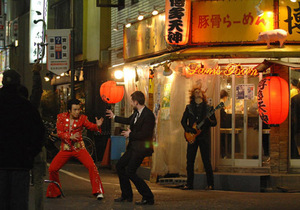 Brandon Flowers wants you to read his mind! The Killers' new single "Read My Mind" will be released worldwide on February 26. Mixes will be available from the Pet Shop Boys, Linus Loves, Gabriel & Dresden and Steve Bays.

The guys are currently touring in Australia and New Zealand, but made time to shoot the video for "Read My Mind" in Tokyo last week. The video was directed by Diane Martel.

Head over to the KillMeNow fansite for more photos from the shoot. That shot of Brandy fighting a Japanese Elvis impersonator outside of a makeshift Sam's Town bar is priceless! (Click here to download the album version of "Read My Mind" on iTunes.)