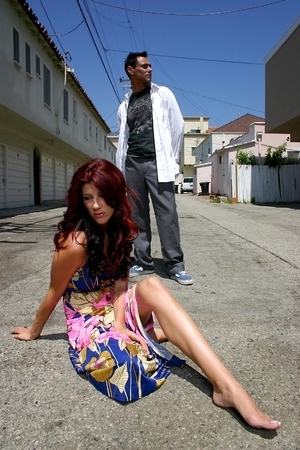 Los Angeles-based duo Bitter:sweet produces an unusual hybrid of jazz, electronica and world music. It is chill like Zero 7 but has the trippy qualities of Portishead. Their album "The Mating Game" was released last year and includes "Bittersweet Faith" that was also included on the popular "The Devil Wears Prada" soundtrack.

Bitter:sweet are singer/songwriter Shana Halligan and songwriter/producer Kiran Shahani who previously founded the Supreme Beings of Leisure. The band was formed when Halligan responded to an ad on Craiglist posted by Shahani wo was looking for a singer to complement his new project. Together they recorded the debut "The Mating Game" that was released back in April of 2006.

Check out a guilt-free MP3 download of "The Mating Game." It is one of those polished and well-produced tracks that paints a clear sonic picture and transports you instantly to a '60s spy novel. Delicious. It will accessorize your day. (Click here to purchase "The Mating Game" album on iTunes.)