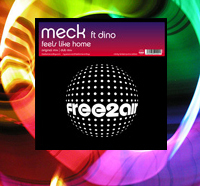 Meck (aka Craig Demich) had a huge smash in Europe earlier this year with his revamp of Leo Sayer's classic "Thunder In My Heart Again" (video). His much-anticipated follow up is "Feels Like Home," another pop-oriented dance tune that features the vocals of Dino Lenny. Some of you might recognize a sample of Felix' "Don't You Want Me' in the song.

The DJ and producer is no stranger to the dance music business. In fact, after working as A&R Manager for the influential Ministry Of Sound label, Meck founded Free2Air Records in 2003 that is now considered one of hottest indie dance labels in the U.K.. Its achievements include three British top ten hits with Jason Nevins, Narcotic Thrust & Mousse T and Meck's own Leo Sayer remix.

Meck puts his savvy to work on the excellent "Feels Like Home." A white vinyl edition will be released to a select group of DJs on January 1.  A commercial release of the song is scheduled of March. Consider this post a early heads up what could easily be one of the biggest dance hits in the early part of 2007.